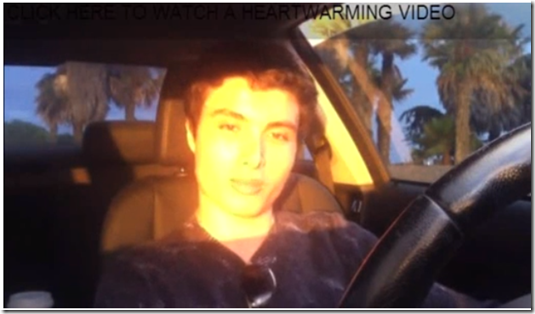 Elliot Rodger speaks about why he was going to massacre innocent human beings. He does it because he feels dejected. He has been rejected by women. He is still a virgin at the age of 22. The long diatribe of this loser could have been summarized in his first one minute fifteen seconds are so.

“Tomorrow is the day of retribution,” Elliot Rodger said in his video. “The day in which I will have my revenge against humanity; against all of you. For the last eight years of my life, ever since I hit puberty, I have been forced to endure an existence of loneliness, rejection, and unfulfilled desires because girls have never been attracted to me. Girls gave their affection and sex and love to other men but never to me. I am twenty two years old and still a virgin. I haven’t even kissed a girl.”

Elliot Rodger seems to believe he is entitled

According to the New York Times,

The gunman involved in a killing spree in Southern California on Friday night was able to persuade sheriff’s deputies who visited him in April that he was not a threat to himself or to others, the sheriff of Santa Barbara County, Bill Brown, said on Sunday morning.

The gunman, identified as Elliot O. Rodger, 22, did not meet the criteria for an involuntary hold when deputies visited him as part of a welfare check on April 30, Sheriff Brown said Sunday on CNN’s “State of the Union.” The deputies were acting on the complaints of Mr. Rodger’s mother, who was alarmed by videos he had posted online.

“They found him to be apparently shy, timid, polite, well-spoken,” Mr. Brown said. “He explained to the deputies that this was a misunderstanding,” and that while he was having some social problems they were unlikely to continue.