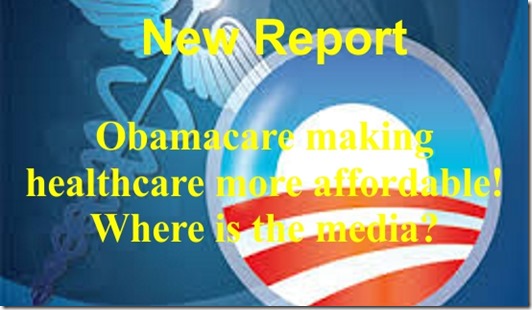 As the media continue to hyperventilate about issues of little consequence like the faux IRA scandal, Benghazi, and Hillary Clinton’s inability to discern what broke means, good things are happening. The realization of policy working is happening. Yet there is no coverage from the media.

New report shows premium affordability, competition and choice in the Marketplace in 2013-2014

Shoppers paid an average of $69 per month after tax credits for silver plans and had, on average, a choice of five health insurers and 47 plans

A new report released today by the Department of Health and Human Services (HHS) finds that people who selected silver plans, the most popular plan type in the federal Marketplace, with tax credits paid an average premium of $69 per month. In the federal Marketplace, 69 percent of enrollees who selected Marketplace plans with tax credits had premiums of $100 a month or less, and 46 percent of $50 a month or less after tax credits.  Today’s report also looks at competition and choice nationwide among health insurance plans in 2013-2014, and finds that most individuals shopping in the Marketplace had a wide range of health plans from which to choose. On average, consumers could choose from five health insurers and 47 Marketplace plans. An increase of one issuer in a rating area is associated with 4 percent decline in the second-lowest cost silver plan premium, on average.

“What we’re finding is that the Marketplace is working.  Consumers have more choices, and they’re paying less for their premiums,” said Health and Human Services Secretary Sylvia Burwell.  “Nearly 7 in 10 consumers who signed up for Marketplace coverage are paying $100 or less for that coverage.  When there is choice and competition, everybody benefits.”

Today’s report demonstrates that the new tax credits are working as intended to make premiums affordable, and the Marketplace is bringing much-needed competition to the insurance market.  In addition, the Affordable Care Act includes a number of other provisions to keep premiums affordable.  The rate review grant program provides states with resources to enhance their rate review programs.  HHS has previously awarded nearly $238 million to states to enhance their rate review programs, and, since the passage of the law, the proportion of insurance company requests for double-digit rate increases was cut by more than half.  Consumers saved nearly $1.2 billion on their premiums in 2012 when compared to the amount originally requested by insurers.  Health insurance companies also now have to spend at least 80 cents of your premium dollar on health care or improvements to care, or provide a refund. In 2012, 8.5 millionconsumers received half a billion dollars in refunds – with the average consumer receiving a refund of around $100 per family.