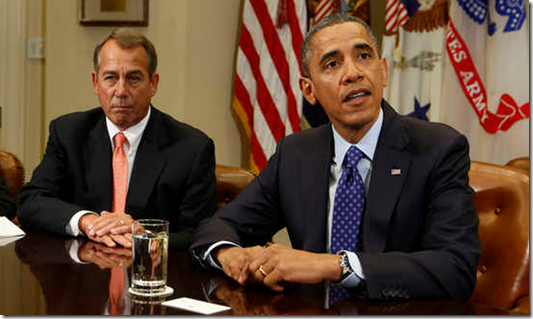 John Boehner said he intends to sue the President at a recent news conference. The New York Times reported the following.

WASHINGTON — Speaker John A. Boehner announced Wednesday that he would introduce legislation next month allowing the House to sue President Obama over his use of executive actions.

In a letter to lawmakers, Mr. Boehner expressed concern with what he — and many in the Republican conference — considered the president’s unconstitutional overreach.

“The Constitution makes it clear that a president’s job is to faithfully execute the laws; in my view, the president has not faithfully executed the laws,” Mr. Boehner told reporters. “And when there’s conflicts like this between the legislative branch and the administrative branch it’s, in my view, our responsibility to stand up for this institution in which we serve.”

Representative Nancy Pelosi of California, the Democratic leader, called Mr. Boehner’s move “subterfuge,” and Josh Earnest, the White House press secretary, said that “it seems that Republicans have shifted their opposition into a higher gear.”

When one reads John Boehner’s letter, it is evident it is nothing but a political ploy. The letter is vague and the few specific “charges” have either been rendered moot by the Supreme Court or are in line with how every other US president has governed.

Jed Lewison at DailyKOS spun that faux-news as follows.

I believe the president is not faithfully executing the laws of our country.

Whoa! Obama is Lawbreaker-in-Chief, eh? Well, if that's the case, why not impeach the lawless renegade? Boehner didn't really have an answer for that, leaving his comments on impeachment to this:

This is not about impeachment. This is about his faithfully executing the laws of this country.

What, specifically, will Boehner's lawsuit be about? To try to get an answer to that question, a reporter asked:

What specific executive actions are you planning to challenge in court?

When I make that decision, I'll let you know.

Is this really where the Republicans are with there politics? When will they do something substantive. Americans will not take much more of this.