Bill Maher called out Conservatives and the Tea Party on New Rules. “Is anybody here tonight ever heard of Doraville, Georgia?” Bill Maher asked. “Me neither. But it is a town of 8,000 people and they have their own tank. So does Nixon Missouri and Justice Illinois. What these small towns and hundreds like them have in common is that they and big cities too have been gifted by the pentagon with tons of government surplus war equipment fresh from our glorious victories in Iraq and Afghanistan. Now I understand it is a dangerous world out there and threats change. … We all know what it is like when you get a new toy. You want to use it. … In West Springfield Massachusetts, the police department’s new toy is two grenade launchers. Why? In case Boko Haram take Connecticut?”

Bill Maher is not being funny here. According to the New York Times,

During the Obama administration, according to Pentagon data, police departments have received tens of thousands of machine guns; nearly 200,000 ammunition magazines; thousands of pieces of camouflage and night-vision equipment; and hundreds of silencers, armored cars and aircraft.

The equipment has been added to the armories of police departments that already look and act like military units. Police SWAT teams are now deployed tens of thousands of times each year, increasingly for routine jobs. Masked, heavily armed police officers in Louisiana raided a nightclub in 2006 as part of a liquor inspection. In Florida in 2010, officers in SWAT gear and with guns drawn carried out raids on barbershops that mostly led only to charges of “barbering without a license.” 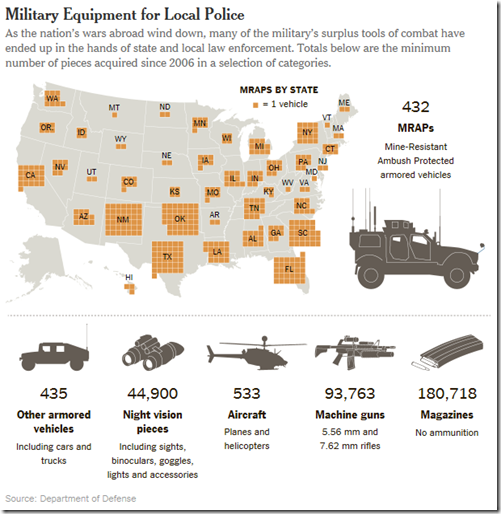 Bill Maher’s finishing rant on his new rule is on point however funny. “90’s Conservative use to warn about jack booted government thugs coming to take away our freedoms,” Bill Maher said. “But where are those Conservatives today when we need them? … This is the massive expansion of government power that you numb skulls in the Tea Party should be freaking out about. You are always screaming. … You are always screaming about the loss of liberty and how tyranny is coming. Yes it’ coming right through the door, with a battering ram, no warrant, and a stun grenade. Or to put it in a way you can understand, I am scared of the cops and I am White!”

The reality is one must ask why. Crime is down sharply over the last 20 years yet local police departments are arming like never before. It should be noted that year over year it is not likely that one would see wobbles in the rate, but the trend has been obvious. Americans are lead to believe that crime is getting exponentially worse. This can probably be attributed to round the clock news and overzealous producers attempting to get eyeballs at all cost.

The benefits to a few for this misbelief is obvious. With fear comes arming. With arming comes sales. With sales of these types of gear come a growing military industrial complex. Once again, thank you incompetent traditional media. Just like you have misled America on policies that would best suite their economic and medical needs, you are effectively doing the same with their safety.