WASHINGTON, DC — In this week’s address, the President continued his call for our nation to rally around an economic patriotism that says rather than protecting wasteful tax loopholes for a few at the top, we should be investing in things like education and job training that grow the economy for everybody.

The President highlighted the need to close one of the most unfair tax loopholes that allows companies to avoid paying taxes here at home by shifting their residence for tax purposes out of the country. The President has put forth a budget that does just that, and he has called for business tax reform that makes investment in the United States attractive, and creates incentives for companies to invest and create jobs here at home. And while he will continue to make the case for tax reform, the President is calling on Congress to take action and close this loophole now. 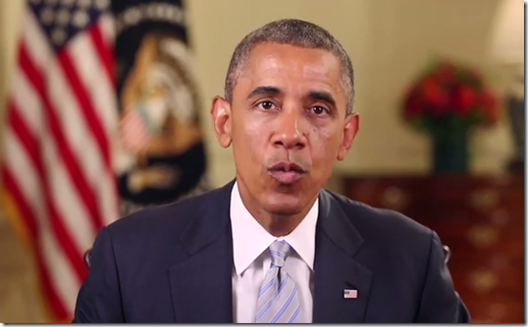 Hi, everybody.  Our businesses have now added nearly 10 million new jobs over the past 52 months.  The unemployment rate is at its lowest point since September 2008 – the fastest one-year drop in nearly 30 years.  401(k)s are growing, fewer homes are underwater, and for the first time in more than a decade, business leaders around the world have declared that the world’s number one place to invest isn’t China; it’s the United States of America – and our lead is growing.

None of this is an accident.  It’s thanks to the resilience and resolve of the American people that our country has recovered faster and come farther than almost any other advanced nation on Earth.

But there’s another trend that threatens to undermine the progress you’ve helped make.  Even as corporate profits are as high as ever, a small but growing group of big corporations are fleeing the country to get out of paying taxes.  They’re keeping most of their business inside the United States, but they’re basically renouncing their citizenship and declaring that they’re based somewhere else, just to avoid paying their fair share.

I want to be clear: this is only a few big corporations so far.  The vast majority of American businesses pay their taxes right here in the United States.  But when some companies cherry-pick their taxes, it damages the country’s finances.  It adds to the deficit.  It makes it harder to invest in the things that will keep America strong, and it sticks you with the tab for what they stash offshore.  Right now, a loophole in our tax laws makes this totally legal – and I think that’s totally wrong.  You don’t get to pick which rules you play by, or which tax rate you pay, and neither should these companies.

The best way to level the playing field is through tax reform that lowers the corporate tax rate, closes wasteful loopholes, and simplifies the tax code for everybody.  But stopping companies from renouncing their citizenship just to get out of paying their fair share of taxes is something that cannot wait.  That’s why, in my budget earlier this year, I proposed closing this unpatriotic tax loophole for good.  Democrats in Congress have advanced proposals that would do the same thing.  A couple Republicans have indicated they want to address this too, and I hope more join us.

Rather than double-down on the top-down economics that let a fortunate few play by their own rules, let’s embrace an economic patriotism that says we rise or fall together, as one nation, and as one people.  Let’s reward the hard work of ordinary Americans who play by the rules.  Together, we can build up our middle class, hand down something better to our kids, and restore the American Dream for all who work for it and study for it and strive for it.

Thanks, and have a great weekend.