Hillary Clinton took a swipe at President Obama on the specific issue he got elected on and she lost on. Yet, like some people who refuse to accept reality, she believes that kicking the President at a low point in his polls would somehow vindicate her biggest political blunder. Instead of accepting neocon type policies as proven failures, she seem to believe the current state in Syria and Iraq somehow vindicates her.

She softened the blow by noting that Obama was “trying to communicate to the American people that he’s not going to do something crazy,” but she repeatedly suggested that the U.S. sometimes appears to be withdrawing from the world stage.

Maybe Hillary Clinton does not quite understand what stupid stuff means. Her interview reveals that she is not much different than John McCain or Lindsey Graham on foreign policy. Yesterday she backtracked releasing the following statement through her spokesman.

Hillary Rodham Clinton called President Obama on Tuesday to assure him that comments she made in a recent interview with The Atlantic were not intended “to attack him, his policies or his leadership,” according to a statement released by Mrs. Clinton’s spokesman.

“Secretary Clinton has at every step of the way touted the significant achievements of his presidency, which she is honored to have been part of as his secretary of state,” said the statement released by the spokesman, Nick Merrill. “Like any two friends who have to deal with the public eye, she looks forward to hugging it out when they see each other tomorrow night.”

That is when Mrs. Clinton and Mr. Obama are set to attend a party on Martha’s Vineyard held by Vernon E. Jordan Jr., a longtime friend to former President Bill Clinton.

Inasmuch as Hillary Clinton backtracked, she showed that she may have the same propensity to doing stupid stuff that American leaders have been espousing for decades. Hillary Clinton is an ‘Israel can do no wrong’ absolutist. She fails to see that in that stance she hurts America’s security. While it is true that firing rockets indiscriminately into Israel is a war crime, it is an unrealized war crime because of American and Israeli superior technology (Iron Dome). A minority of militants should not sentence a population to death and despair.

Hillary Clinton claims Hamas was better able to manage the coverage. Really? It is hard to misrepresent 1900+ dead, mostly innocent Palestinians, and a large percentage of buildings turned into rubble in Gaza at the same time that Israel remains pristine with less than one hundred mostly soldiers dead. This lack of empathy is emblematic of neocons. It causes the aggrieved to lash out.

Hillary Clinton speaks of jihadist groups as if they really present an existential threat to the United States. She says the following.

One of the reasons why I worry about what’s happening in the Middle East right now is because of the breakout capacity of jihadist groups that can affect Europe, can affect the United States. Jihadist groups are governing territory. They will never stay there, though. They are driven to expand. Their raison d’être is to be against the West, against the Crusaders, against the fill-in-the-blank—and we all fit into one of these categories. How do we try to contain that? I’m thinking a lot about containment, deterrence, and defeat

Does that not sound like George W Bush rhetoric? Does Hillary Clinton really believe that gunmen in pickup trucks, a few stolen tanks, and video cameras displaying their propensity to decapitate and execute their fellowman are threats to the US. We have aircraft carriers, cruise missiles, destroyers, tanks, nuclear bombs, ICBMs, armed drones, night vision, and many other tools of killing. We invested billions for this. Anyone can put a video on YouTube with bold claims. But should that scare the lone Superpower?

While jihadist are formidable in their territory, they are but a nuisance to us. If we are looking for folks to fear, we need not look further than our local armed right wing militias and armed crazy US citizens. While Americans may fear scary jihadist videos, our government should know better lest their intent is to keep the military industrial complex overfunded.

When Hillary Clinton was asked to elaborate on her organizing principle, she fell into Republican talking points.

I think people want—and this is a generalization I will go ahead and make—people want to make sure our economic situation improves and that our political decision-making improves. Whether they articulate it this way or not, I think people feel like we’re facing really important challenges here at home: The economy is not growing, the middle class is not feeling like they are secure, and we are living in a time of gridlock and dysfunction that is just frustrating and outraging.

This was the perfect segue for Hillary Clinton to be truthful about what ails America and the American economy. The economy is growing unlike what the GOP talking points say. The problem is that most of that growth is going to the top one percent. Hillary Clinton failed to state that growth would be much better absent a proven failed austerity policy demanded by the GOP. She failed to call out Republicans on their intransigence that prevented infrastructure, research, and other spending necessary to rebuild the country and boost the economy for years to come. Americans want to know  why things are not working and what the next president will do for the working poor and working middle class. 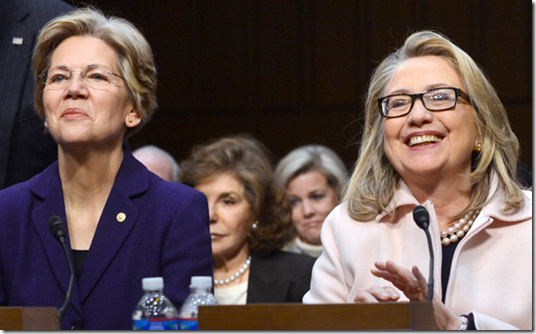 With all his faults President Obama won over 50% of the vote for his election and reelection. He passed a healthcare bill that has eluded presidents for nearly a century. He has changed our foreign policy from brute force to a game of chess (sometimes even good chess players make bad moves). And he has kept the country viable throughout Republican intransigency , sabotage by certain corporations, and a corrupt Supreme Court. Hillary Clinton should remember that if Al Gore had run on Bill Clinton’s record, the Supreme Court would not have had the chance to appoint George W Bush president. Running from her record with President Obama is not a winning strategy.