Liberals and Progressive have great ideas. Moreover, these ideas are intrinsically moral. Unfortunately in that Ivy League thought process, where the desire to promote equal access to success is prevalent, marketing these ideas against the immoral forces of the selfish is at best a dismal failure.

In a capitalist society, those with the most capital are in power. They use that power to control government regulation of the economy and with that the economy itself. Wealth and income inequality mean that it is a very select few who dictate the lives of us all.

Unfortunately, there is a dirty little secret a few people talk about. Nick Hanauer, a rather observant capitalist/plutocrat, spoke about it in his TED Talk a couple years ago.

I can say with confidence that rich people don’t create jobs. Nor do businesses large or small. Jobs are a consequence of a circle of a lifelike feedback loop between customers and businesses. And only consumers can set in motion this virtuous cycle of increasing demand and hiring. In that sense an ordinary consumer is more of a job creator than capitalists like me. That’s why when business people take credit for creating jobs it is a little like squirrels taking credit for creating evolution. It’s actually the other way around. Anyone who has ever run a business knows that hiring more people is a course of last resort for capitalists. It’s what we do if and only if rising consumer demand requires it. And  in this sense calling yourself job creators isn’t just inaccurate, it is disingenuous. That is why our existing policies are so upside down.

The middle class is at a breaking point 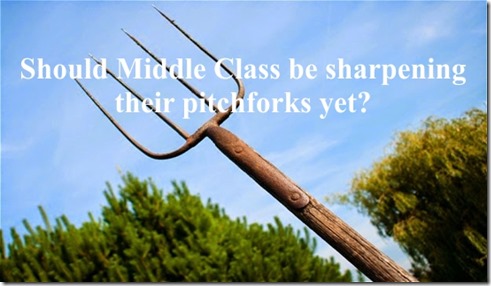 Nick Hanauer got under the skin of many of his friends again with his TED Talk titled ‘Beware, fellow plutocrats, the pitchforks are coming’. In this one he said the following.

I have a broad perspective on capitalism and business, and I have been rewarded obscenely for that with a life that most of you all can’t even imagine: multiple homes, a yacht, my own plane, etc., etc., etc. …

You see, the problem isn’t that we have some inequality. … The problem is that inequality is at historic highs today and it’s getting worse every day. And if wealth, power, and income continue to concentrate at the very tippy top, our society will change from a capitalist democracy to a neo-feudalist rentier society like 18th-century France. That was France before the revolution and the mobs with the pitchforks.

So I have a message for my fellow plutocrats and zillionaires and for anyone who lives in a gated bubble world: Wake up. … It cannot last. Because if we do not do something to fix the glaring economic inequities in our society, the pitchforks will come for us, for no free and open society can long sustain this kind of rising economic inequality. It has never happened. There are no examples. You show me a highly unequal society, and I will show you a police state or an uprising. The pitchforks will come for us if we do not address this. It’s not a matter of if, it’s when. And it will be terrible when they come for everyone, but particularly for people like us plutocrats.

I wrote a piece titled “Middle Class Must Assert Its Worth To Assure Their Share Of America’s Wealth” imploring the working poor and the middle class to step up to the plate. I said the following.

I then went on to illustrate that it is the sum total of all professions starting from the teachers, to the lawyers, doctors, engineers, custodians, cooks, and all other professions that make this economy run. The capitalists neither have the knowledge nor wherewithal to produce a product or service. The wealth they believe themselves entitled to is only plausible because of a middle class and working poor who believe the plutocrats and capitalists offer some intrinsic value.

Nick Hanauer made a most prescient statement in his parallel piece in the July/August issue of Politico Magazine. He said the following.

You show me a highly unequal society, and I will show you a police state. Or an uprising. There are no counterexamples. None. It’s not if, it’s when.

Many of us think we’re special because “this is America.” We think we’re immune to the same forces that started the Arab Spring—or the French and Russian revolutions, for that matter. I know you fellow .01%ers tend to dismiss this kind of argument; I’ve had many of you tell me to my face I’m completely bonkers. And yes, I know there are many of you who are convinced that because you saw a poor kid with an iPhone that one time, inequality is a fiction.

Here’s what I say to you: You’re living in a dream world. What everyone wants to believe is that when things reach a tipping point and go from being merely crappy for the masses to dangerous and socially destabilizing, that we’re somehow going to know about that shift ahead of time. Any student of history knows that’s not the way it happens. Revolutions, like bankruptcies, come gradually, and then suddenly. One day, somebody sets himself on fire, then thousands of people are in the streets, and before you know it, the country is burning. And then there’s no time for us to get to the airport and jump on our Gulfstream Vs and fly to New Zealand. That’s the way it always happens

Have you ever wondered why education is under attack? An educated population will come to the realization that the current system that assigned a higher wealth potential value to the movers of capital, to the plutocrats is undeserved and ill-advised. They did not and have not earned it.

As more of the working poor and middle-class Americans come to that realization, Nick Hanauer’s fears will be realized. The pitchforks are being sharpened one finger at a time. America is simmering. It’s all covered up now. But it won’t be for much longer.