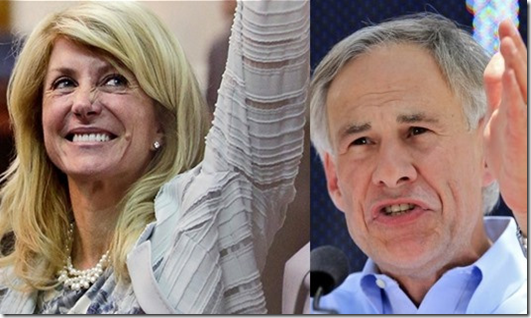 FORT WORTH - Tori Adams started clapping as soon as she saw Wendy Davis appear on the television screen during the first gubernatorial debate Friday night.

Adams was among those in Davis' hometown cheering on their candidate of choice in this year's gubernatorial race, which pits Davis, a state senator, against Republican Texas Attorney General Greg Abbott.

For Adams, Friday was a chance to watch a longtime friend - someone she has known since their daughters went to kindergarten together - follow her political path.

"That's my leader - someone I have seen develop in her journey to public service."

Adams and more than a dozen other Davis supporters, all wearing stickers in support of the former Fort Worth City Council member, watched the debate at Classic Wine Storage as they prepared candy sachets for an upcoming Annie's List event.

Periodically during the hour-long debate, which was at the Edinburg Conference Center at Renaissance in the Rio Grande Valley, the supporters broke out in applause and cheers when Davis spoke.

Many also sighed and muttered not so quietly after various Abbott remarks.

Adams pointed out that Abbott set the guidelines for the debate that ranged from adhering to a strict time limit to not allowing a live audience.

"He's trying to turn this into a courtroom because that's all he knows," she said.

Local Republicans said they knew ahead of time that Abbott's performance was going to be stellar during Friday night's debate.

"This isn't your typical politician going to a debate," said state Sen. Kelly Hancock, R-North Richland Hills, and a friend of Abbott's. "This guy has argued before the Supreme Court."

Hancock describes Abbott as an articulate, knowledgeable man who rarely makes mistakes. He's certain Abbot was as prepared as anyone could be for the debate.

"You don't want to walk into a courtroom unprepared," Hancock said. "He won't walk into [a debate] unprepared.

"I think we are going to be very fortunate in November."

State Rep. Craig Goldman, R-Fort Worth, said he started getting to know Abbott years ago when they found themselves talking to each other during University of Texas football games in Austin.

He said Friday night's debate clearly had to compete with a true Texas love - Friday night football - but he believes many people would watch it live or on social media after the games.

"Debates are always important so you can see a clear distinction between the candidates," said Goldman, a friend and supporter of Abbott. "In this case, there's a clear distinction - one will continue on the right path and one, I believe, will take Texas on the wrong path."

"I think we are going to be very fortunate in November."

Sue Baird was pleased Friday night to see Davis on TV. Baird has known her since the candidate's father started Stage West years ago.

Baird hasn't had a chance in the past to vote for Davis because she hasn't lived in her City Council or Senate district.

That changes this year, she said.

Better than that, she said, is the fact that Davis may have gained new supporters from the debate.

"If people were undecided before the debate, I think they will say, 'Yes, she could be governor'," Baird said. "She's doing good."

For Amy Jacobs, who worked with Davis years ago at a local law firm, it was a good experience to watch such a familiar face on television.

"I thought she was articulate and knew what points she wanted to get across," Jacobs said with a smile. "It was great."

Libby Watson, a former Fort Worth assistant city manager, came to know Davis when she was on the City Council.

Watson said she was impressed with how her friend performed in the debate.

"She's talking from her heart, not from notes," she said. "I can tell you from personal experience that she's the smartest person up there."