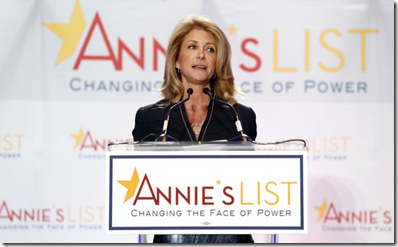 Dallas, TX: Today during the Annie’s List luncheon in Dallas, Wendy Davis called out Greg Abbott for his out-of-touch position on abortion – proposing to make it illegal even in cases of rape and incest.  Her remarks come 48 hours after one of his campaign surrogates defended his position by dismissing these horrific crimes as “minor issues”.

Davis spoke about her work to eliminate the backlog of untested rape kits in the state, discussed the stories of a rape survivors, and slammed Greg Abbott for his opposition to abortion even in cases of rape and incest.

Davis said, “Women don’t need a Governor like Greg Abbott who’s ruled against rape survivors in four out of five cases, who sided against a woman who tried to get justice after a door-to-door salesman brutally raped her in her own home and whose representative got on TV to defend Abbott’s opposition to abortion in the cases of rape and incest, and called rape and incest ‘minor issues’.”

“Maybe if Greg Abbott went over and spent time with the woman he sided against who had repressed memories of her father assaulting her, he’d understand that incest isn’t a ‘minor issue’. Maybe if Greg Abbott put himself in the place of women who’ve had to make the heartbreaking decision to end a pregnancy instead of sitting on high, belittling the pain and trauma they’ve been through, he’d understand that his position is offensive to every Texas woman and a betrayal of everything we say we stand for. The last thing Texas women need in their lives is Greg Abbott.”

“We cannot allow Greg Abbott and his insider buddies and to treat abortion in the case of rape and incest like the minor issue they say it is.”
Abbott Said He Would Make Abortion Illegal Even In Cases Of Rape & Incest:

In October 2013, The Associated Press reported that Abbott said he opposed abortion in all circumstances, even in the cases of rape and incest.  [AP, 10/06/13]

Dating back to 2002, Texas Weekly reported that Abbott has said, “Regarding instances of rape and incest, which constitute less than 1 percent of all abortions and are admittedly very difficult situations, I further believe life must be preserved.”  [Texas Weekly, 7/01/02]