2014 Coffee Party USA Board – Where we are going

Jeanene Louden, Debilyn Molineaux, and Egberto Willies arrived before noon on Thursday. They had lunch and then checked into the home rented for the retreat. After discussing Coffee Party USA history for a few hours, it was time to visit Coffee Party USA Denver. 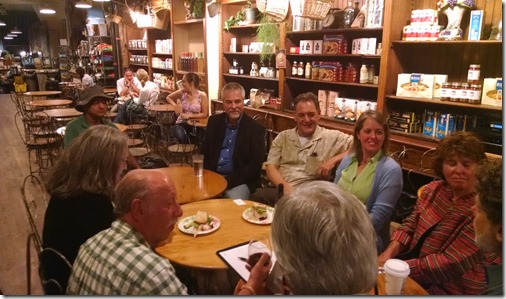 Coffee Party Denver Niccolo Casewit invited the board to the meeting. Many question were asked and answered about many Coffee Party USA events, grievances, and actions. The meeting went extremely well and ended with hugs and backslaps.  Steve Justino of Move to Amend also attended the meeting. He was interested in collaborating with Coffee Party USA to use its reach on Supreme Court actions.

Board of Directors Billy Sears and Vince Lamb missed their planes. Vince Lamb was able to get a flight in on Friday. Billy Sears was unable to do so. Directors Tonya Jefferson and Cameron Michaels were unable to include flying in their schedule. Billy and Tonya attended the board meeting via Google Hangout and Cameron provided input as his schedule allowed.

Attending this event allowed the Coffee Party to establish working relationships with large national organizations like the Humane Society of the United States, the Organization for Competitive Markets, Food and Water Watch, the American Antitrust Institute, and others.  The effort will continue this weekend as I attend the Public Banking Institute conference in Santa Fe and, later in October, the outreach continues along the east coast.

The organizations are becoming aware of the Coffee Party and value our principles as they apply to their causes.  They all support our efforts to bring issues forward in civil engagement and to develop active citizens.  It is the hope of these organizations to allow Coffee Party members to learn about their issues and mobilize in constructive ways.

I believe the Coffee Party membership will be given opportunities to use our principles to encourage citizens to participate in causes important to membership.  We will report all our efforts to membership and, as individuals wish, we’ll pave the way to participation.  It will be exciting.

Jeanene Louden said the following about the same event.

I assisted new Board member Tim Danahey as he moderated the conference on Friday, September 19th. The lineup of National leaders from diverse aspects of the good food movement and the spoke strongly about the cost of “the failed experiment” of international, industrial agriculture, the strategies to support local and family owned farms and ranches, and calling for unity with one another and other organizations interested in supporting the will of The People. We represented Coffee Party USA as a good government partner wherever and whenever the elected failed to represent their constituents in favor of the interests of big campaign donors.

The Coffee Party was an “Outreach and Media” partner for the event.

Though the Coffee Party board had different activities on Thursday and Friday, many sub-dialogues were taking place that all came together on Saturday.

The Coffee Party USA board set a new direction based on the results of a survey of our members and on ideas new and recycled. Constant information will be provided to our members via our new Newsletters and forthcoming blasts.

In short we will be reactivating 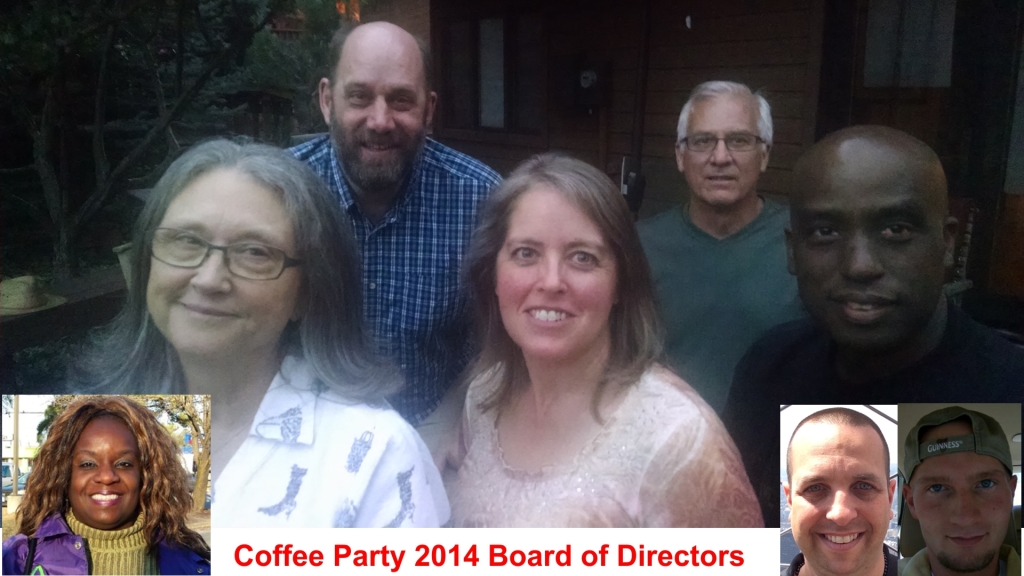 The 2014 Coffee Party Board meeting was the most substantive board meeting to date. Our new President Debilyn Molineaux ends with  the following prophetic statement that we all intend to make true. “There is something synergistic about having the right people in the right place at the right time that really feels like it is going to propel us into the future. We are going to take off.”