These newspapers made the right call, Wendy Davis. 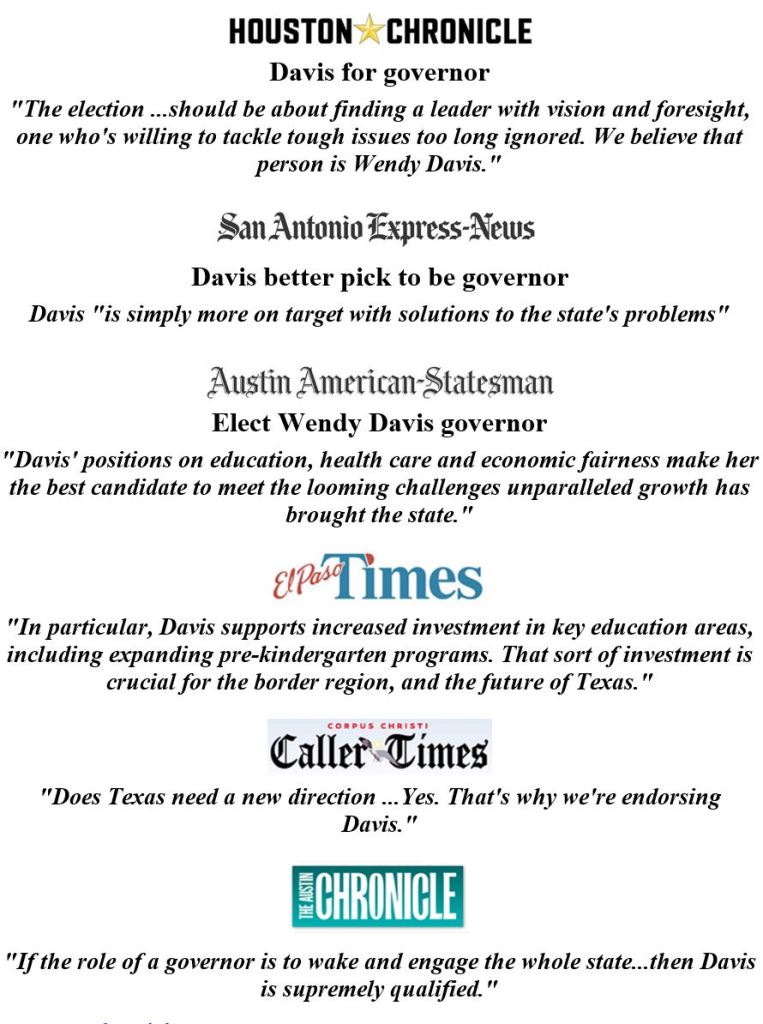 The election ... should be about finding a leader with vision and foresight, one who's willing to tackle tough issues too long ignored. We believe that person is Wendy Davis.

His Democratic opponent, we believe, will do everything possible to sustain the state's impressive economic growth, but she also will seek to broaden the state's focus. We're confident she'll work to assure that every Texan has an opportunity to share in the state's prosperity. And, with Republicans still in the majority in the Legislature, she will have no choice but to reach out to the other side in ways that Abbott is less likely to do.

A Gov. Davis, we believe, will attempt to invest in the future of this state. That investment would take a variety of forms, from universal pre-kindergarten to adequately funded public schools and public universities that aspire to be the best in the country; from addressing the economic effects of climate change, particularly diminishing water supplies, to protecting an environment increasingly stressed by a rapidly growing population.

Her appointments, we believe, would reflect not only the rich diversity of this state but also would include watchdogs, not lap dogs, over such vital state agencies as the Department of Insurance, whose current commissioner has regularly taken industry's side over the consumer. And, in the same way she twice resorted to a filibuster in an effort to block bad legislation, she would use the governor's veto pen to protect the interests of her fellow Texans.

Texas is in need of decisive leadership that will look at lingering problems in new ways. It's in need of leadership different from the kind the state has had for much of the last 14 years under Gov. Rick Perry.

Something different than: federal government as boogeyman; responsible regulation of Texas resources and its environment deemed anti-business; international border as threat; raising the minimum wage as anti-jobs; and the notion that public education isn't in dire need of immediate additional investment.

Because she is simply more on target with solutions to the state's problems, we recommend Wendy Davis to be Texas' next governor.

While Abbott talks about more targeted money for public education - and incentives but no state mandate for universal, all-day pre-K - he's not who we'd pick to buck a Legislature with its head in the sand on education funding in particular. Here also, he is appealing yet another case in which a state district judge, not the first, has said funding is inadequate and unconstitutional. Davis, who attempted to filibuster $5.4 million in cuts to schools a few years ago, believes schools are underfunded and that the Legislature should revise the funding formula.

On Nov. 4, Texans will elect a new governor for the first time in 14 years. We think that new governor should be Democrat Wendy Davis.

First elected to the Texas Senate in 2008 when she beat the Republican incumbent in her conservative Fort Worth district, Davis, 51, made national headlines on June 25, 2013, when she filibustered a restrictive abortion bill. Her protest was not her first filibuster, however. Davis eloquently opposed disastrous funding cuts to education at the end of the 2011 legislative session and played an important role in persuading legislators to restore most of the education money during the 2013 session.

Davis lists public school education as a priority. She has called for funding full-day pre-kindergarten programs - a proposal that she says would cost about $730 million but could be partially offset by closing corporate tax loopholes. She wants the Legislature to raise teacher pay. She has fought to reduce standardized testing.

She has a legislative record of working with Republicans and is a conservative Democrat on more issues than her liberal supporters want to acknowledge. She has the ability to pull together moderate Republicans and Democrats to forge what state legislators like to call Texas solutions.