Mayor Annise Parker’s daughter was denied a drivers license as the Texas Department of Public Safety had problems with her birth certificate showing two moms.

Her daughter was eventually able to straighten it all out. The Department of Public Safety issued the following statement.

All individuals applying for their first Texas driver license must provide a variety of documents to prove their identity, Social Security Number, U.S. citizenship or lawful presence status, and Texas residency. In this case, the adult applicant did not initially present sufficient documentation to prove residency. Once she provided the required documentation, she was able to complete the transaction. There is no indication that any delay in the process was related to same-sex marriage.”

Mayor Annise Parker issued the following tweets throughout the ordeal. 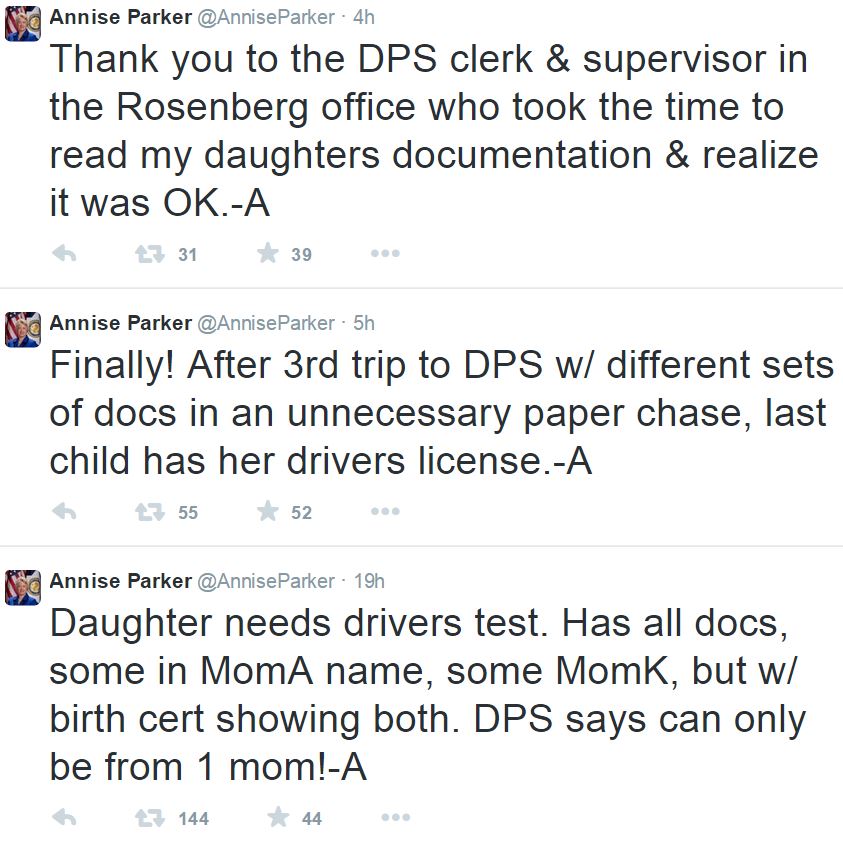 This is not an isolated case. The Texas Observer reported the following.

A woman who recently relocated from California says the Texas Department of Public Safety refused to issue her an accurate driver’s license because her last name was changed through a same-sex marriage.

After Connie Wilson married her partner of nine years in California last year, she took her wife’s last name, Wilson, which now appears on both her California driver’s license and her Social Security card, in addition to all of the couple’s financial and medical records.

This summer, the couple relocated to the Houston area with their three children for work. With her California driver’s license nearing expiration, Wilson took her documents to a DPS office in Katy last week to obtain a Texas driver’s license. When a DPS employee noticed that Wilson’s name didn’t match her birth certificate, she produced the couple’s California marriage license identifying her spouse as Aimee Wilson.

“Her only words to me were, ‘Is this same-[sex]?’” Connie Wilson recalled. “I remember hesitating for probably 10 seconds. I didn’t know how to answer. I didn’t want to lie, but I knew I was in trouble because I wasn’t going to be able to get a license.”

“I don’t want any other person to go through what I have experienced over this.” Wilson eventually responded that although California doesn’t differentiate, she happened to be married to a woman.

“She immediately told me, ‘You can’t use this to get your license. This doesn’t validate your last name. Do you have anything else?’” Wilson said. “She told me I would never get a license with my current name, that the name doesn’t belong to me.”

If it can happen to the Mayor of the 4th largest city in the country, Houston, Texas, it can happen to anyone. This is yet another reason why Texans must get rid of the troglodytes currently residing in Austin, Texas.