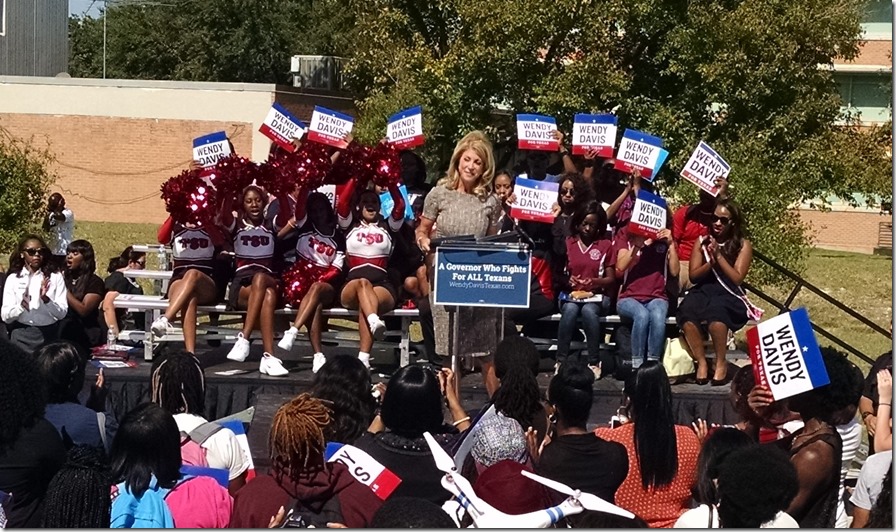 I attended Greg Abbott’s kickoff at a BBQ joint in Conroe, Texas. Conroe is a very Red town northeast of Houston. Greg Abbott wheeled himself into the joint and immediately started his stump speech. One would think he was running either against President Obama or to be the evangelical pastor of the state. The following skit is the impression any thinking Liberal would have left with.

The local media failed to ask him about women and minorities being paid less for comparable positions in his attorney general’s office. They failed to ask him about the crony dealings with the Cancer Prevention Research Institute of Texas (CPRIT). They coddled him in questioning him on his refusal to answer whether he would have defended a Texas’ ban on interracial marriages as he is doing with Texas’ ban on marriage equality.

Interestingly, the tone of the local TV media was rather condescending with Senator Wendy Davis. One station asked her why she was spending so much time in Harris County. The answer is apparent. Harris County, Dallas County, Tarrant County, Travis County, Behar County, and counties in The Valley area are where Democratic voters are located. The Republican voters are in the rural rest of the state. They did not ask Greg Abbott why he only campaign in Tea Party strongholds. The raw Wendy Davis interview follows.

One of the reporter’s questioned her about bringing up the interracial marriage ban issue as if it was Wendy Davis who actually started the thread. He was asked the question by the San Antonio Express specifically because of his forceful objection and defending of Texas’ ban on marriage equality. They are congruent issues. The TV media attempted to put Wendy Davis on the defensive for bringing up a legitimate flaw in Greg Abbott’s reasoning as they gave him a pass.

The most outrageous question however came from the Houston Chronicle reporter Theodore Schleifer. “Senator Davis, I just spoke with a supporter who said that the Black community,” Schleifer said. “would be more supportive of you if you embraced President Obama more.” Senator Wendy Davis handled the question well by pointing out that the issues President Obama stands for, that the community stands for are the same issues she has been articulating throughout her campaign.

After the interview I tracked down the Houston Chronicle reporter specifically because from experience one could infer that it was a made up question to fit a narrative. I asked him if he really spoke to a Black person who told him that. He fumbled and said he did not know if the person was Black.

I informed him that the Black community is a very sophisticated voting community. Specifically they are not a block. However they are smart enough to know that Wendy Davis must do a level of distancing that any other politician would as well. It is almost a requirement in order to get the vote of a certain sect of White Democrats and Republicans that have a ‘problem’ with President Obama. Black people have for centuries in America coddled many with preconceived notions to sway their fears and insecurities with a smile and a knowledge of the context.

When the Houston Chronicle’s reporter wrote the article for the paper he ensured that my words were sufficiently ambiguous to hit the President. He wrote the following.

Egberto Willies, a local Democratic activist, disagreed with that position.

“Black folk in Houston are sufficiently smart to understand what she has to do to win some of the disaffected white vote,” Willies said of Davis. “Why would she, or any politician, embrace Obama?”

The role of the media is to report. Unfortunately as occurs throughout the country, many times they set a narrative influenced by the nebulous powers with the expectation that it will have the effect of complete control of the body politic. Lewis Powell must be smiling in his grave.