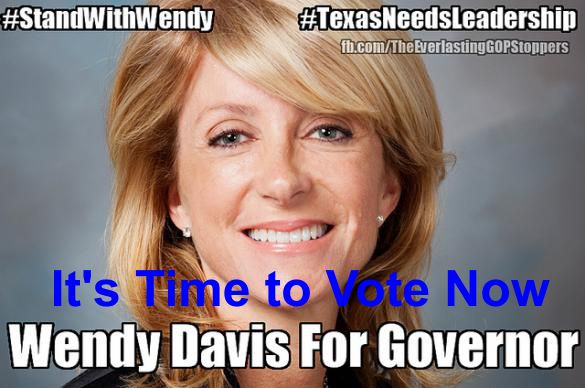 It is crunch time now and it is time for perspective. Please share this with a message urging folks to go out and vote now.

Fort Worth– Greg Abbott spent most of the governor’s race on defense, spending months demonstrating just how he is not working for Texas women. From campaigning with admitted-sexual predator, Ted Nugent, to his opposition to equal pay for equal work and the disclosure that he actually pays the women in his office less than men, to the revelation that Abbott sided against rape victims four of out five times while on the Supreme Court and his support for banning abortion even in the case of rape or incest, Abbott has consistently shown he’s not fighting for women.
Wendy Davis would sign the Texas Equal Pay Act and has worked to bring justice to survivors of sexual assault by passing a law to test a backlog of rape kits and proposing an end to the statute of limitations for rape.

Here’s a quick look back on how Abbott spent months of the race on defense about his repeated efforts siding against Texas women.