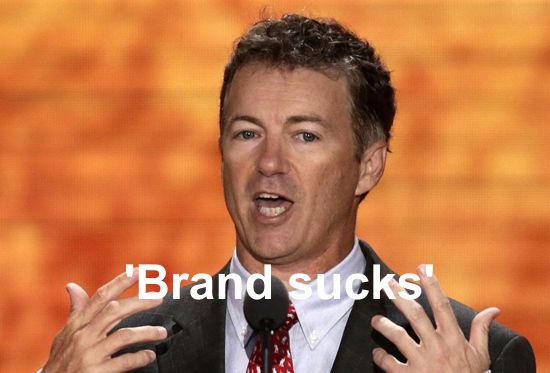 I have been watching the evolution of the Rand Paul facade for some time. This evolution seems rooted in the attempt to make an un-electable Rand Paul into a plausibly electable Rand Paul. I have written several articles on him specifically because the transformation of his facade could actually gain traction in places and demographics one would never imagine.

According to The Hill, Rand Paul made some rather interesting statements at a GOP field office in a predominantly middle-class black neighborhood

The weakness, Paul added, is particularly serious when it comes to appealing to black voters.

“Remember Domino’s Pizza? They admitted, ‘Hey, our pizza crust sucks.’ The Republican Party brand sucks and so people don’t want to be a Republican and for 80 years, African-Americans have had nothing to do with Republicans,” he said.

“Why? Because of a perception,” he said. “The problem is the perception is that no one in the Republican Party cares.” ...

“We’re also fighting 40 years of us doing a crappy job, of Republicans not trying at all for 40 years, so it’s a lot of overcoming,” he said. “You got to show up, you got to have something to say and really we just have to emphasize that we’re trying to do something different.” ...

“We look at incarceration and we see a disproportionate number of people of color in jail and then when we see statistics on drug use, it seems to be about equal among all the different races,” he said. “Blacks and Hispanics seem to populate our jails more.”

Many continue to doubt that the American voter will ever take Rand Paul, someone with a checkered history on race, gender, and many other issues, seriously. Rand Paul has been courting voters of every demographic and class over the last few years. He has slipped into Right Wing Republican form when necessary to remain viable within the Party machine.

Remember, he does not need to win the majority of those many believe he does not have a chance of winning. He just needs to win a sufficiently large piece to merge with the monolithic vote he will always get from his base. The issue isn't his intelligence or lack thereof or his past. Americans have a history of electing from perception as opposed to substance.