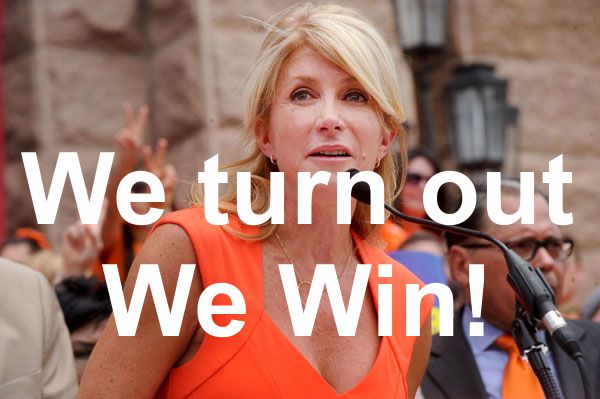 "The Republican Party of Bexar County has issued a series of desperate pleas to conservative voters, saying"the Democrats are beating us on base turnout..."

"We noticed that our base is sagging a bit," said Bexar County GOP Chairman Robert Stovall.

"While Republicans are anxious about their turnout numbers, Democrats are buoyed by theirs."

"Stovall is puzzled by any bump in Democratic voting."

SAN ANTONIO - The Republican Party of Bexar County has issued a series of desperate pleas to conservative voters, saying "the Democrats are beating us on base turnout," but two of the Texas party's biggest names converged on San Antonio to get any complacent GOP voters off their couches.

"It's a risk when people feel you're going to win. They feel 'why bother?' That's why events like this are so important, to encourage people to vote," Cornyn said.

"We noticed that our base is sagging a bit," said Bexar County GOP Chairman Robert Stovall.

"For the first time, I hope Republicans are right," quipped his Democratic counterpart, Manuel Medina.

Both parties are armed with overnight data from early voting that ends Friday. While Republicans are anxious about their turnout numbers, Democrats are buoyed by theirs.

"What I'm concerned about is a lot of people feel like the statewide candidates are in great shape," Stovall said. And that could hurt down-ballot Republican candidates, he said.

Stovall is puzzled by any bump in Democratic voting, citing the low poll numbers for gubernatorial candidate Wendy Davis of Fort Worth and lieutenant governor candidate Leticia Van de Putte of San Antonio.

"We wonder why Democrats have an incentive to get out and vote if their top two candidates are so far behind," Stovall said.

Will Hurd, who's seeking the U.S. Congressional District 23 seat, chats with supporters at the Alamo Café event. The local GOP is pushing for more people to vote.

Medina said his party has been capitalizing on an unprecedented effort to register voters with help from Battleground Texas since 2013. Early turnout is similar to 2010, "but the composition of that turnout, at this point, is better for Democrats," Medina said.

"We've made a special effort to campaign in Precinct 3 in recent years," Medina said. The party has had several events in the area, organized a women's coalition, held its Christmas party in The Dominion and conducts monthly meetings in Stone Oak, Medina said.

Davis, meanwhile, was in Houston trying to boost turnout there. She told 40 volunteers and supporters that the campaign remained winnable with a strong final week of work in the field. Organizers came up to Davis after the event and said they too believed victory was in reach with a strong enough get-out-the-vote effort.

The trailing candidate has projected confidence in the closing days of the 12-month campaign, which she told supporters had been "very emotional."