Jon Stewart gets to the core of bad journalism in Minnesota

Jon Stewart got to the  core of what should be an embarrassing moment in journalism displayed by Minnesota TV station KTSP. When the story first appeared on the DailyKOS, one could not help but believe it was a joke. It started off a social media storm with its own hashtag, #pointergate.

#pointergate may be the most racist news story of 2014 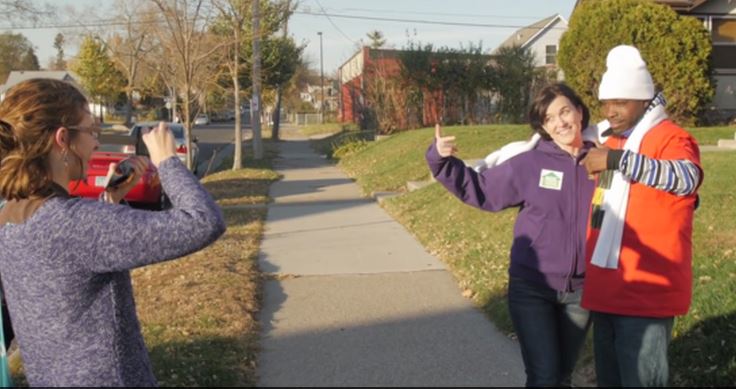 What you are about to read and watch is stranger than fiction. It’s so racist and so outrageous, that people are questioning whether or not it’s satire from The Onion. It’s real though, and that’s what is so shocking and heartbreaking about the whole ordeal.

Getting their picture taken above is the mayor of Minneapolis, Betsy Hodges, with Navell Gordon, a young volunteer from the respected Twin Cities charity, Neighborhoods Organizing for Change.

To better understand the context, please take just one minute to watch the beginning of [this video]. Pay particular attention at 0:32-0:39 as Navell and Mayor Hodges share a clumsy “how do we pose in this photo together” moment.

Imagine, then, the shock, utter disappointment, and disgust when the local ABC news affiliate, KSTP ran a news story on Thursday night claiming that Mayor Hodges dangerously flashed a gang sign with a known criminal and has put officers in harms way. Follow the trail below.

It seems that the Minneapolis, Minnesota police used the media for it own purposes. They did not take kindly to ‘vision for Minneapolis’ in her open letter that both commended and called-out the police.

This story reveals a deeper problem. It illustrates clearly that the media has become lazy and easily manipulated. Instead of investigating, like parrots, they just repeat information prepackaged for their consumption. This type of media dereliction of duty is now commonplace. It was evident from the lies they repeated about the Affordable Care Act debate to the misinformation dragging us to war with ISIS/ISIL, to the hyperventilation that scared Americans on Ebola.

In this particular case, the police attempted to use the media to activate recessive racism to malign a mayor attempting to do good. The end of the Jon Stewart piece is more important than many would notice initially. His amusing enumeration of a litany of ‘things Black people do that look suspicious’ has a cold connotation of this story.