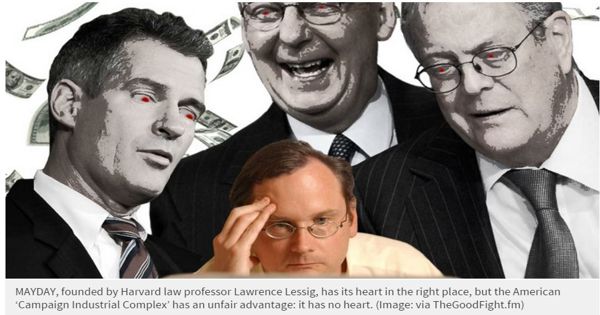 Lawrence Lessig’s MAYDAY.US (MAYDAY) was an ambitious project. It exploded onto the scene with a mission to change the direction of the electoral process. Their website lists a four step process by which this would occur:

Many organizations have been working on the corrosive nature of money in politics pre and post Citizens United. (Concern about money in politics predates Citizen United, is well documented, and already has defined solutions.) The newcomer MAYDAY received traditional mainstream media coverage these other organizations could only dream of. That media coverage assured that MAYDAY’s SuperPAC coffers would be filled. After all, a message to clean up politics sells, and a well-advertised message sells even better.

The media understand super PACs. Having an organization that threatens to clean up money in politics using the same method as the offenders is great theater. After-all, however noble, all SuperPACs are biased by those leading the super PAC directly and indirectly through their large donors. Sadly, Americans yearning for a political system that works are the ones that bear the brunt of experiments in futility.

There is very little MAYDAY could have done to alter that course. It is likely all of the people MAYDAY touched went out to vote. It is just as likely those people are the ones that always vote.

For there to be a change one must get to those people in the barrios, the hoods, the trailer parks, and Appalachia to engage those who don’t vote to start voting according to their own interests. One must also speak to the heart of those who continue to vote against their own interests, election after election. That cannot be accomplished with a top down approach. It is done from the bottom up.

A bottom up approach takes more time than an election cycle because trust must be built with these communities first. One must engage them in small groups where mutual educational processes can occur. One must understand the wants, needs, and fears of these disparate communities to weave them into the fabric of our failing democracy in order to improve the quality of their lives and repair the damage years of structural racism, corporate personhood trumping community rights, and an election system awash with corruption and money has created. In other words, we must build a movement.

A lasting movement is not created in two years. Many organizations like Move To Amend are working within various communities to build trust with and engagement in the body politic. Other organizations like Coffee Party USA are building outreach and alternate media infrastructure to ensure Americans get more than corporate filtered news.

These organizations understand fundamentally that institutions partially inspired by the Powell Manifesto have been working through various think tanks, educational institutions, and the media to fool the American voter and that indoctrination at this level can only be mitigated through direct engagement and grassroots organizing.  While these organizations are finding great success, they struggle to grow their capacity to reach the general public. MAYDAY’s $10 million dollars would have been better served contributing to already existing organizations on the ground within communities that could have made a difference.

Many lessons must be learned from the failure of MAYDAY:

MAYDAY’s heart was in the right place, but the American ‘Campaign Industrial Complex’ is heartless. It will always encourage and provide fanfare for those who create conflict--because it sells--but only for those whom they are sure will ultimately be no threat to its existence.