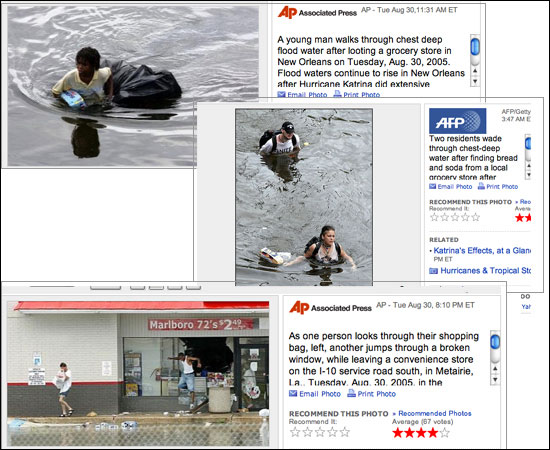 Why is one looting and the other finding? It is the classic example of the type of biases minorities must endure. This is more dangerous than one may think. It creates within the human subconscious that particular races are predisposed to do negative things. As such it is yet another hurdled those aggrieved by an inhumane system must overcome.

The New York Times reported this as follows.

The first photo, taken by Dave Martin, an Associated Press photographer in New Orleans, shows a young black man wading through water that has risen to his chest. He is clutching a case of soda and pulling a floating bag. The caption provided by The A.P. says he has just been "looting a grocery store."

The second photo, also from New Orleans, was taken by Chris Graythen for Getty Images and distributed by Agence France-Presse. It shows a white couple up to their chests in the same murky water. The woman is holding some bags of food. This caption says they are shown "after finding bread and soda from a local grocery store."

The DailyKos reported it as follows.

A young man walks through chest deep flood water after looting a grocery store in New Orleans on Tuesday, Aug. 30, 2005. Flood waters continue to rise in New Orleans after Hurricane Katrina did extensive damage when it made landfall on Monday.

Two residents wade through chest-deep water after finding bread and soda from a local grocery store after Hurricane Katrina came through the area in New Orleans, Louisiana.