Social Security at risk on Day One of 114th Congress 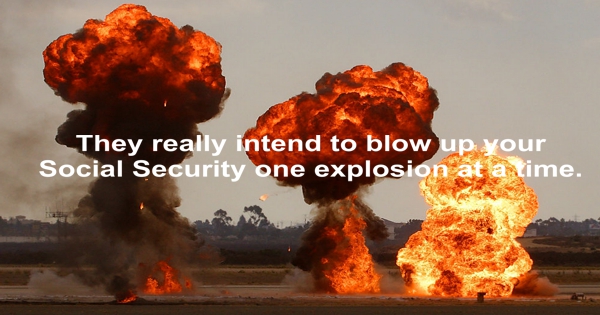 One of the first orders of business of the newly installed 114th Congress was the attack on Social Security. It was an immediate ideological move. The American infrastructure is falling apart. Infrastructure projects produce millions of high paying jobs, increase overall productivity, and much more. Tinkering with Social Security in an ad-hoc manner does none of that. However, it will put many families in dire straights.

It is preached ad nauseam. Your vote matters. Many have warned for a long time that ideology reigns supreme with the current crop of Republicans. Gone are the days for the GOP leaders like Robert Dole, Howard Baker, and William Fritz who were ideological conservatives willing to compromise in the best interest of most Americans.

With a little-noticed proposal, Republicans took aim at Social Security on the very first day of the 114th Congress.

The incoming GOP majority approved late Tuesday a new rule that experts say could provoke an unprecedented crisis that conservatives could use as leverage in upcoming debates over entitlement reform.

The largely overlooked change puts a new restriction on the routine transfer of tax revenues between the traditional Social Security retirement trust fund and the Social Security disability program. The transfers, known as reallocation, had historically been routine; the liberal Center for Budget and Policy Priorities said Tuesday that they had been made 11 times. The CBPP added that the disability insurance program "isn't broken," but the program has been strained by demographic trends that the reallocations are intended to address.

Why are they doing this? It is a coy manner to reduce overall Social Security benefits. Let me explain.

These reallocation gives Congress the necessary time to come up with a comprehensive Social Security reform that can be debated transparently where every American can demand what they really want out of our most popular safety net, Social Security.

What the Republicans with this move is attempt to do is extract concessions from every American on Social Security by creating yet another crisis. If DI is going to be insolvent in 2 years and there is a new rule that prevent the standard reallocation, they can hold Social Security recipient hostage. In other words they could force reduction in Social Security benefits in order to do what is necessary to ensure that both DI and OASI are solvent.

This is the standard play Americans have had to endure not only with Social Security but with unions, infrastructure, healthcare education. Republicans continue their policy of asking poor and middle class Americans for ever so more to ensure more tax cuts for the relatively few wealthy.

Social Security is in jeopardy because we continue to under tax the well to do. The average poor and middle class American citizen pays Social Security taxes on 100% of their income. This is what I wrote in my book "As I See It" that still holds true even in the age of Hope and Change.

For those who have the false belief that it is somehow unjust that the more wealthy should have a larger tax burden, they must understand that the inordinate exponential increase in wealth by the very wealthy has nothing to do with their increase productivity, or more work but from the flawed design of our economic system that rewards the movement and appreciation of capital more so than an honest day’s work, productivity, or innovation. In other words, if one inherits 100 million dollars one will never have to work, innovate, or provide anything to society on the march to billionaire status. Such a system is mathematically unsustainable.

Warren Buffet, the third richest person in the world speaking at a Hillary Clinton fundraiser in 2007 stated that he made forty six million dollars in income in 2006 (do not confuse income with wealth. At that time he was worth north of 52 billion dollars). He said he paid 17.7 per cent in income tax without attempting to find tax shelters to lessen the tax burden. His secretary who earned sixty thousand dollars was taxed at the higher rate of 30 per cent. Mr. Buffet went on to say that it was United States government policy that accentuated the disparity in wealth that hurt the economy by stifling opportunity and motivation.

... most working people pay taxes on most of their income while the very rich whose monies are tied to stocks and investments will generally pay a maximum indexed tax to 28%. Moreover, generally no taxes are paid at all on income from municipal bonds. One should also note that most working people pay social security taxes on all their income while the more well off stop paying social security taxes on income over $106,000.

The final paragraph is very important. The maximum income subject to Social Security tax is now $118,500. In other words the CEOs, bankers, stock brokers, and many other high income persons do not pay Social Security taxes on most of their incomes. Equitable taxing all income including capital gains would solve much of our fiscal problems in America. Republicans and corporatist Democrats refuse to talk about this. The derelict media refuses as well.

One of the strengths of Social Security is its universality. It is based on the principle that we are stronger together. It is an old tactic of the program's opponents to seek to divide and conquer. They seek to turn young against old by falsely claiming that too much is being spent on the old. They seek to turn African Americans against whites with the preposterous claim that Social Security is unfair to blacks. (We document and refute these and many other claims in our new book). This time they seek to drive a wedge between retired workers and disabled workers by claiming that reallocation helps the disabled at the expense of the old -- another preposterous claim. All of these divide-and-conquer strategies are intended to turn Americans against each other so that all of their benefits can be cut.

The politicians will only do what is right when citizens are informed. This George Carlin snippet is probative. Currently creating dissension among different groups is the divide and conquer method being used. Americans get the government they elect. Americans will get the policy they demand if those they elect understand that they are in fact knowledgeable.