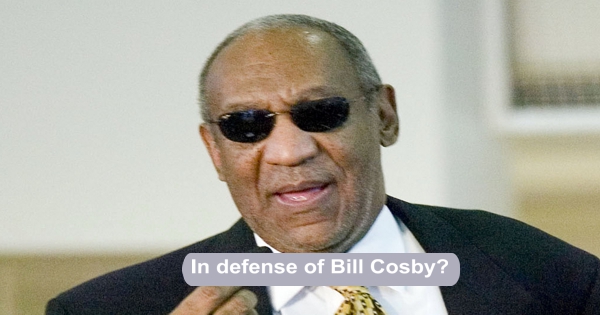 Dr. Boyce Watkins is no fan of Bill Cosby. In fact he wrote “Five Reasons Black People Don’t Listen to Bill Cosby” where he said the following.

My questions for Dr. Huxtable, as he engages in his ego-maniacal “reign of terror”, completed in celebration of his latest cure for 400 years worth of social ills would be listed below. Of course, Bill would never have a conversation with any scholar with the ability to rip his ideas apart. His only response (on the Oprah Winfrey Show, with no dissenters present) is “My critics are all crazy”. Sounds like a doctor to me….

Bill, in order to solve a problem, mathematics says that you must work on both sides of the equation. Why you are afraid to challenge America’s institutions, but boldly go after black mothers and children is beyond me. It is not productive to walk in the middle of a fight and tell one of the kids that he is wrong, while allowing the other kid to go off and play. But then again, that’s the way the black kids are always treated in our school systems, as we learned in the Jena 6 case.

One can’t be sure who is worse: Bill Cosby, who engages in the non-sensical and unproductive act of complaining about black people in front of predominantly white audiences, or the scientist James Watson, who said that he can prove that black people are genetically inferior to whites. What is scary is that Watson would listen to the words of Cosby and agree with him 100%….did you notice that Bill O’Reilly likes Bill Cosby too?

When a proven racist agrees 100% with what you are saying about your own people, perhaps that should give you a moment of pause. But it doesn’t appear that Cosby is pausing….he spends too much time flapping his gums. As a professor, I have a saying “When you are 100% teacher and 0% student, you are 100% idiot.” I wish he were still telling those corny jokes.

Well, Dr. Boyce Watkins recently wrote what seemed like a ‘defense’ of Bill Cosby in his piece “Bill Cosby and those many, many white women.” It was not a defense stating he was innocent of the rape allegations. It was a defense of Bill Cosby as a flawed human being. It was the observation that inasmuch as he may behaved very badly, there are forces that are monopolizing on them to destroy the man. He wrote the following.

As ugly allegations continue to surface about comedian Bill Cosby, I choose not to see things in absolutes.  I refuse to stop giving him credit for providing wonderful lessons for kids on the show “Fat Albert.”  I’ve never been one to believe that a celebrity can do no wrong, Cosby included.  I still think Clair and Cliff Huxtable represented the greatest couple in the history of television.  I still think Bill Cosby is both a jerk and a genius.  I will always thank him for giving millions to HBCUs, when men like Dr. Dre refused to give a dime.  To me, Bill Cosby is neither a demon nor a saint.  He’s just a brilliant, modestly-funny, sometimes-detached, philanthropic old man who might have raped women and probably thinks way too much of himself.

So, the point here is that my views on Cosby have always been deliberately mixed, partly so I could avoid the temptation of buying into false imagery created from Jello Pudding pop comercials, and also because I know a modern day lynching when I see one.   Yes, the Cosby attacks appear to be too consistent and orchestrated for me to believe that it’s all happening by chance.  Almost every single day, the media delivers a new accuser to the public like the UPS guy dropping off a package from Amazon Prime.  Someone clearly wants to destroy him.

The entire article by Dr. Boyce Watkins is definitely worth a read. It will add some perspective to the entire Bill Cosby rape saga.