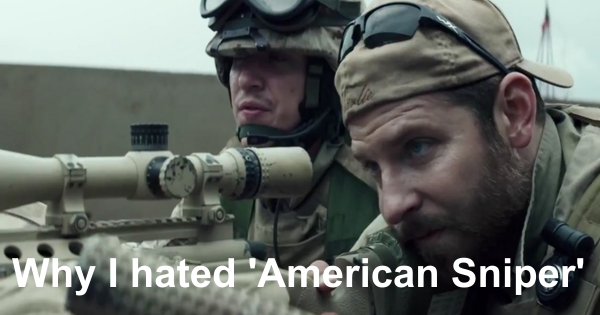 It was the birthday of my a dear friend this weekend. We all went out to dinner (three couples). Birthday boy wanted to go to a movie after dinner. With all the attention given to American Sniper over the last few weeks I was sure that would be the chosen movie. It was.

I will say upfront that I hated the movie. I think the fuss has been used strategically to increase its box office prowess.

That said, our soldiers  do what most Americans are unwilling to do. They are in fact true patriots as they have signed up to possibly die for whatever our flawed leaders send them to do.

I did not hate American Sniper because I believe snipers are cowards as was articulated by Michael Moore. I do not believe any soldier that fought any war can be considered a coward. A sniper is a soldier with an important job in war.

I did not hate the movie because I thought the movie dehumanized the Iraqis. American movies have always dehumanized ‘the other’, women, minorities and everyone in between.

I did not hate the movie because it distinctly inferred that Chris Kyle’s foray into the Iraq war was somehow related to 9/11. This is a lie that those in the Right and their media machine have refused to let die. Clint Eastwood, the director of American Sniper is simply continuing that modus operandi.

I hated American Sniper because I believe it was effective. It was effective in merging war as a prerequisite for patriotism. I hated it because it made killing seem rather antiseptic. I hated this movie because it promoted the tenet that a victimized America had unfettered license to kill.

The ending of the movie was indeed moving. Chris Kyle’s murder was a tragedy. The Chris Kyle story embellished or not is an American story. It was very easy to get caught up in the moment.

Throughout the entire movie I was living vicariously through the eyes of Chris Kyle. I was ashamed that I was not only rooting for his survival but for a savage American Iraq policy, a policy that killed thousands of innocent civilians on a false premise.

At the end of the movie the theater erupted in applause. The movie had fulfilled its purpose. Yes, the movie was effective. Our unending propensity for war will continue. The American populace has been successfully programmed to give tacit approval. Mission accomplished Clint Eastwood. Mission accomplished military industrial complex.