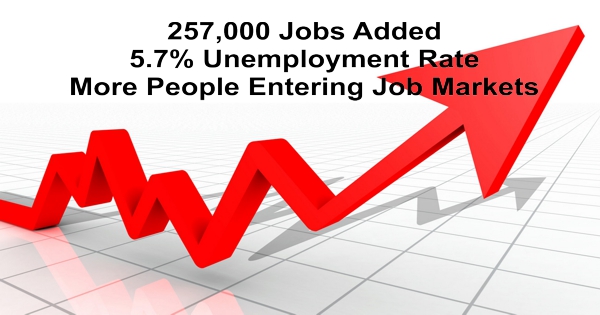 It is evident that the economy is in fact on the rise irrespective of those talking it down. The following report from the Bureau of Labor Statistics (BLS) says it all.

Total nonfarm payroll employment rose by 257,000 in January, and the unemployment rate was little changed at 5.7 percent, the U.S. Bureau of Labor Statistics reported today.

The unemployment rate, at 5.7 percent, changed little in January and has shown no net change since October. The number of unemployed persons, at 9.0 million, was little changed in January. (See table A-1. See the note at the end of this news release and tables B and C for information about annual population adjustments to the household survey estimates.)

After accounting for the annual adjustments to the population controls, the civilian labor force rose by 703,000 in January. The labor force participation rate rose by 0.2 percentage point to 62.9 percent, following a decline of equal magnitude in the prior month. Total employment, as measured by the household survey, increased by 435,000 in January, and the employment- population ratio was little changed at 59.3 percent. (See table A-1. For additional information about the effects of the population adjustments, see table C.)

The number of persons employed part time for economic reasons (sometimes referred to as involuntary part-time workers) was essentially unchanged in January at 6.8 million. These individuals, who would have preferred full-time employment, were working part time because their hours had been cut back or because they were unable to find a full-time job. (See table A-8.)

In January, 2.2 million persons were marginally attached to the labor force, down by 358,000 from a year earlier. (The data are not seasonally adjusted.) These individuals were not in the labor force, wanted and were available for work, and had looked for a job sometime in the prior 12 months. They were not counted as unemployed because they had not searched for work in the 4 weeks preceding the survey. (See table A-16.)

Among the marginally attached, there were 682,000 discouraged workers in January, down by 155,000 from a year earlier. (The data are not seasonally adjusted.) Discouraged workers are persons not currently looking for work because they believe no jobs are available for them. The remaining 1.6 million persons marginally attached to the labor force in January had not searched for work for reasons such as school attendance or family responsibilities. (See table A-16.)

Total nonfarm payroll employment rose by 257,000 in January. Job gains occurred in retail trade, construction, health care, financial activities, and manufacturing. After incorporating revisions for November and December (which include the impact of the annual benchmark process), monthly job gains averaged 336,000 over the past 3 months. (See table B-1 and summary table B. See the note at the end of this news release and table A for information about the annual benchmark process.)

Employment in financial activities rose by 26,000 in January, with insurance carriers and related activities (+14,000) and securities, commodity contracts, and investments (+5,000) contributing to the gain. Financial activities has added 159,000 jobs over the past 12 months.

Professional and technical services added 33,000 jobs in January, including increases in computer systems design (+8,000) and architectural and engineering services (+8,000).

Employment in other major industries, including mining and logging, wholesale trade, transportation and warehousing, information, and government, showed little change over the month.

The change in total nonfarm payroll employment for November was revised from +353,000 to +423,000, and the change for December was revised from +252,000 to +329,000. With these revisions, employment gains in November and December were 147,000 higher than previously reported. Monthly revisions result from additional reports received from businesses since the last published estimates and the monthly recalculation of seasonal factors. The annual benchmark process also contributed to these revisions.