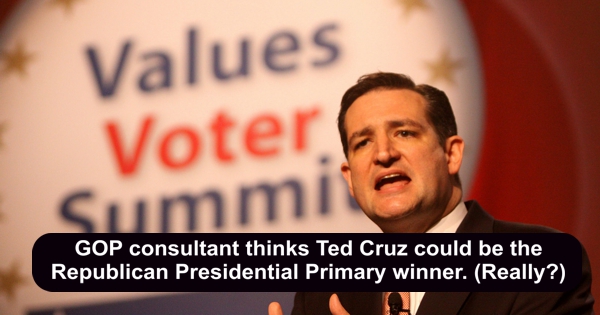 This morning many woke up to a Chris Cillizza piece in the Washington Post that is a bit shocking. He interviewed a Republican consultant who “has been right more times than I can count” for his piece titled “Ranking the 2016 Republican field.” So how does this consultant explain the shocking possibility that Ted Cruz has an even chance of being the Republican Presidential nominee?

Obviously, the fight for the top spot in the establishment lane is crowded, with Bush and possibly Wisconsin Gov. Scott Walker leading at the moment. Ditto the social-conservative lane, with former Arkansas governor Mike Huckabee, Ben Carson and Rick Santorum pushing hard there. The libertarian lane is all Sen. Rand Paul’s, but, as I noted above, it’s still not that big.

This leaves the tea party lane, which is both relatively large and entirely Cruz’s. While Paul looked as though he might try to fight Cruz for supremacy in that lane at one time, it’s clear from his recent moves that the senator from Kentucky is trying to become a player in a bunch of lanes, including social conservative and establishment. So, Cruz is, without question, the dominant figure in the tea party lane.

The consultant assumes that because many of the early primaries are in the South, the stronghold of the Tea Party, that he can outlast the field by winning or being competitive in most of those raises. His biggest obstacle would be Mike Huckabee, the former governor of Arkansas and Evangelical Minister. In effect the consultant believes that if Ted Cruz wins the Tea Party vote, and skims some votes from the conservative lane and the libertarian lane, that he could actually win the Republican primaries.

While Chris Cillizza may be glass eyed over this consultant who is usually more right than wrong, this time this consultant is likely very wrong. He continues to buy into the current state of the Republican Party as one that is inclusive.

Here is a reality, Ben Carson, Ted Cruz, and Marco Rubio have no chance of winning the Republican Primaries. If any of these guys seem to get any traction, the consultants will do what they know best. They will go ethnic.

Mike Huckabee is an expert in doing it without seeming to do so lest one forgets his Uncle Sugar diatribe a few years back. The same Republicans that were comfortable enough to show the President as a monkey, a foreign born Muslim, a drug dealer, and worse will be reminded that Ted’s surname is not American born Cruise but Latino Canadian born Cruz.