The Social Security debate is on 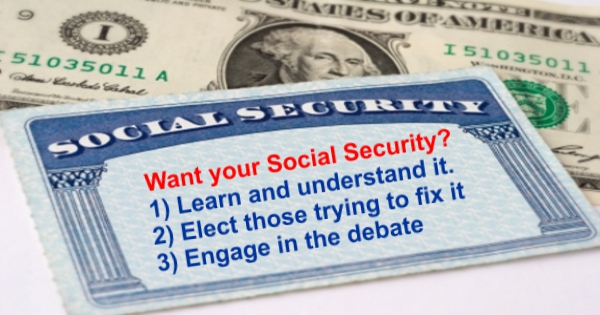 But it gets worse. If one makes their income from stock appreciation, one pays nothing. In other words, if one owns a lot of stock and the value of said stock increases by $1 million, zero Social Security taxes are paid. If you are an average middle-class or poor employee you are responsible to pay  north of 6%. If you are an self-employed middle class person you are responsible to pay north of 12%.

Many of the wealthy arrange to get paid with incentive stock options. This means they pay no Social Security taxes on that income at all.

Democrats are starting to ramp up the fight to remove the Social Security cap.

The definitive Democratic counterproposal in the fledgling fight over Social Security is starting to emerge, and it has a familiar ring in the era of income inequality politics: tax the rich.

More specifically, Democrats are proposing to raise or eliminate the cap on Social Security taxes. Those taxes are currently collected up to $118,500 of a person’s income, and any income above that is Social Security tax-free. The liberal Center for American Progress said in a new report last week that the program had lost $1.1 trillion over the last 30 years because of it.

Sen. Bernie Sanders (I-VT) announced last week that he would propose eliminating the cap for income above $250,000. His office estimated that that would keep Social Security solvent until 2060; the program is currently projected to start running out of money in 2033.

“If Republicans are serious about extending the solvency of Social Security beyond 2033,” Sanders said, “I hope they will join me in scrapping the cap that allows multi-millionaires to pay a much smaller percentage of their income into Social Security than the middle class.”

The Democrats’ plan while commendable, does not go far enough. If absolutely all forms of income are taxed, the rate will go down for the vast majority of Americans. It would bring a huge tax relief to small businesses as the portion of the Social Security tax they must pay for each employee would be reduced.

One should not allow those against taxing all income to conflate terms. In order to mislead, this country has defined for the most part two basic forms of income, wage income and investment income. One gets wage income from going to work. One gets investment income from either the realized appreciation of their investments/stocks or the dividends said stocks and financial instruments pay. In other words their is much income being earned by folks who need not get out of bed. By concentrating the debate on wage income, politicians and the wealthy plutocracy keep the discussion away from the money sinks.

All income should be subject to Social Security Opponents counter this with a rather silly argument.

It is time to remove the notion that Social Security is simply an insurance policy like one would expect in the private markets. It must not be. It must be defined as simply retirement. It should be indexed in a form that defines a minimum standard of living for a retired person. That inhibits the rich from gouging the system.

A country need not go through hoops to make it seem as if Social Security it is not some sort of transfer program. It is. It is a transfer from working people who can afford to pay to the retired who has served the country as workers to keep the most vibrant economy in the world afloat. Everyone has played their part however little.

It is true that the wealthy would pay more. That is a good thing. Their is an aberration in our economic system that does not value people based on their actual contribution to society. Intelligent redistribution mitigates this.