Walmart ‘starting’ to do the right thing? 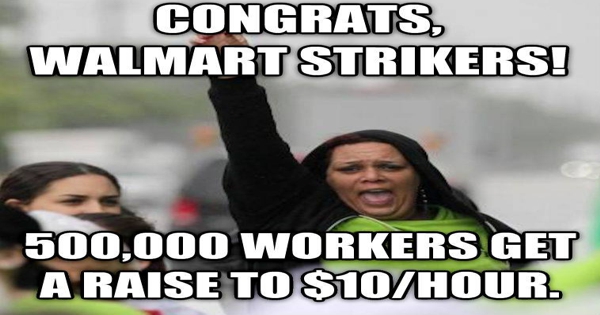 Activism works. It works slower with a government that is corrupted by the corrosive influence of money in politics. However it works effectively on companies whose baseline is dependent on the average American citizens’ continued patronage. Companies like Gap and Ikea saw the light. Costco have always understood that a well paid worker makes a returning satisfied customer and a reliably solid bottom line.

This is not a favor to employees. This is overdue compensation and just a start. This is something Walmart could have done years ago. A 2011 UC Berkeley study pointed out that if Walmart paid it’s worker’s a minimum wage of $12.00 and passed the entire increase onto customers, it would cost the customer 46 cents a trip or about $12.49 per year.

Even if Walmart were to pass 100 percent of the wage increase on to consumers, the average impact on a Walmart shopper would be quite small: 1.1 percent of prices, well below Walmart’s estimated savings to consumers. This works out to $0.46 per shopping trip, or $12.49 per year, for the average consumer who spends approximately $1,187 per year at Walmart. This is the most extreme estimate, as portions of the raise could be absorbed through other mechanisms, including increased productivity or lower profit margins.

The same study showed that little amount has a tremendous impact on the financial well-being of those receiving the increase.

Our data suggests that a $12 per hour minimum wage standard at Walmart would be effective in aiding lower-income families. If Walmart increased its minimum wage to $12 per hour, 41.4 percent of the income gain would accrue to workers with wages below 200 percent FPL. These low-wage workers could expect to earn an additional $1,670 to $6,500 a year in income.

Activists will continue shaming, effecting boycotts, and forcing legislation to ensure companies pay a living wage. Krystal Ball got it right with this one  a few months back. Walmart’s raise is just a small down-payment for the living wage all working Americans deserve.