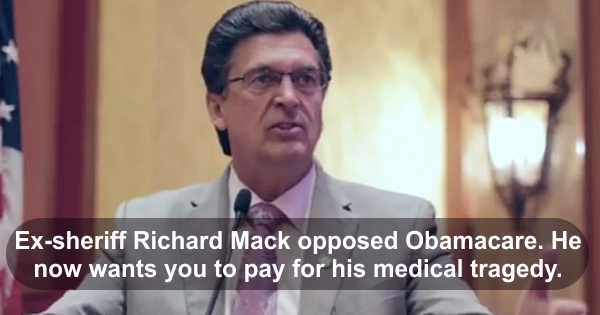 I wish no ill upon anyone. In fact I feel nothing but compassion for former Arizona county sheriff Richard Mack.

Richard Mack is self employed and has no insurance. His wife fell ill last year. Richard Mack himself got a heart attack in January.

Richard Mack is a founder of Constitutional Sheriffs and Peace Officers Association and a staunch opponent of Obamacare. He is now begging Americans for a handout to pay his medical bills.

In November of 2014, Richard Mack’s wife Dawn was hospitalized with serious medical issues. Then, in early January of 2015, Richard suffered a heart attack that required surgery. Because they are self-employed, they have no medical insurance and are in desperate need of our assistance. Please follow this link to learn more about how you can donate. http://www.gofundme.com/helpsheriffmack If you prefer to donate directly to a bank account, here is the information to use: Bank: Wells Fargo Name on Account: Richard Mack Routing Number: 122105278 Account Number: 2816818385 Be sure to get a receipt. If you wish to verify that the family received the donation or have any other questions, send a note to thiswayamerica@cox.net . Much appreciated!

His situation could occur to anyone. One wonders if he would have been a staunch Obamacare opponent if he had any idea of what fate had in store for his family. Empathy has been in short supply for many. On hope this example will narrow the empathy gap.