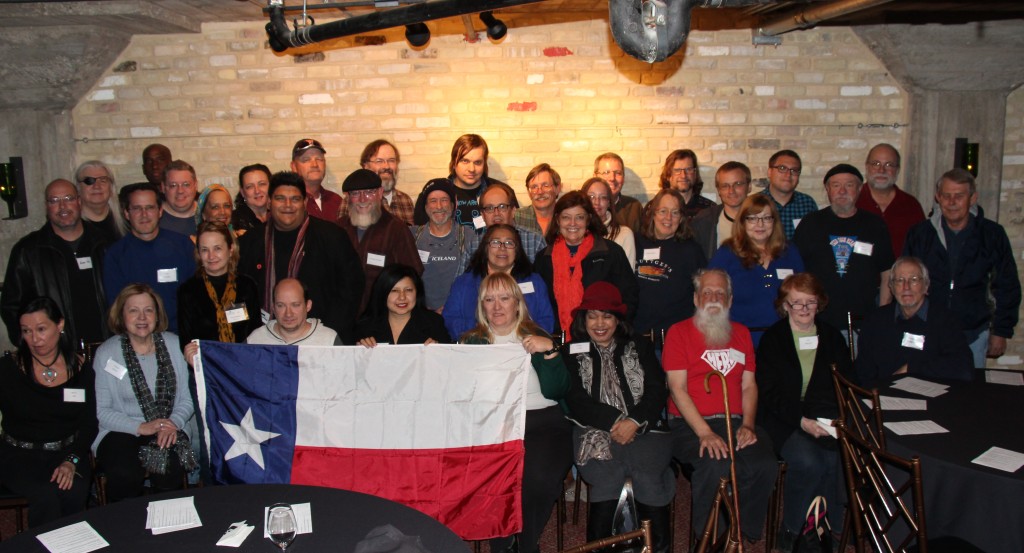 The rain, sleet, and snow were not enough to stop the Texas KOS meetup in Austin, Texas this weekend. One must remember Texans do not know how to drive on ice, let alone snow. 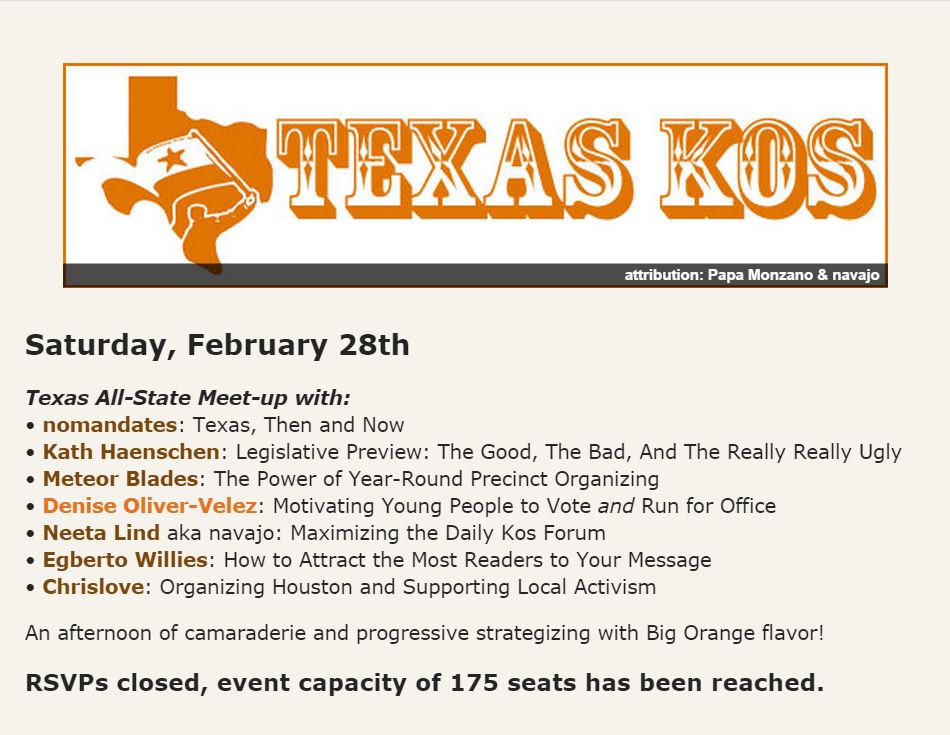 Registration reached the event capacity of 175 seats. Unfortunately the weather tempered the actual attendance to between 50 and 75. We heard stories from Kossacks coming from North Texas that had near misses, slides, and more. It was evident most simply could not take the chance. The weather in Texas was brutal. The Austin, Houston, and San Antonio contingents were large as they did not have the icy weather.

NoMandates opened the session by describing the Texas KOS group and giving examples of the impressive amount of work it has done so far. She framed the seminar. 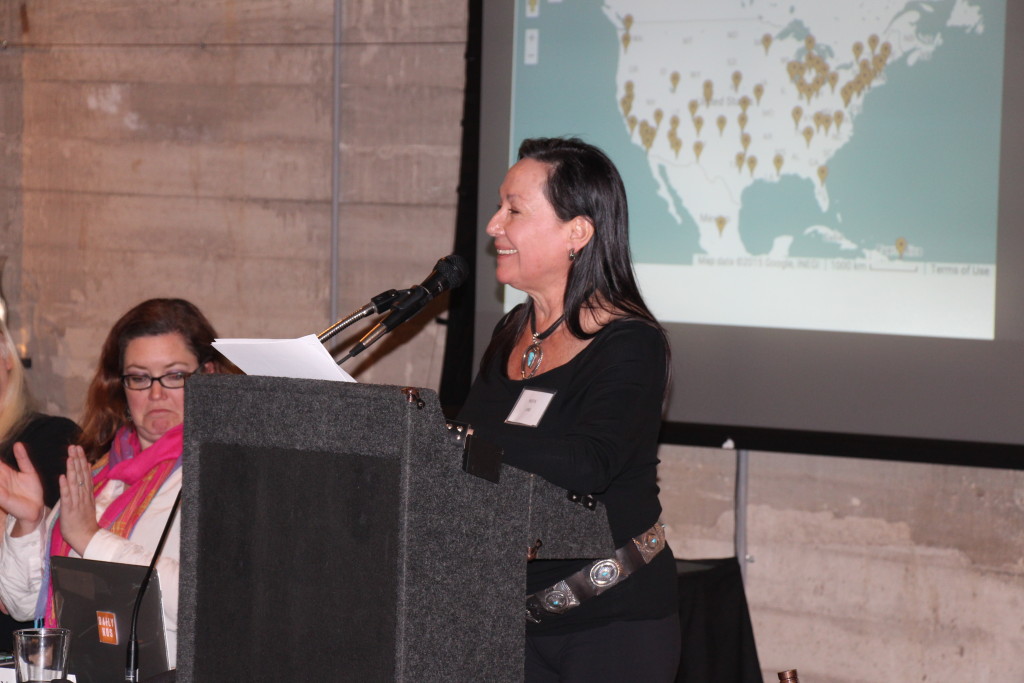 Our fearless Director of Community Building Neeta Lind (aka Navajo), NoMandates, and ChrisLove put on a meetup that was more an inter-learning conference than anything else. Neeta spent some time providing the rather impressive metrics of the DailyKOS site and community.  The Kossacks that were able to attend made an event where everyone left more learned and charged to get into action. After all, shouldn’t political involvement be a requirement for citizenship? 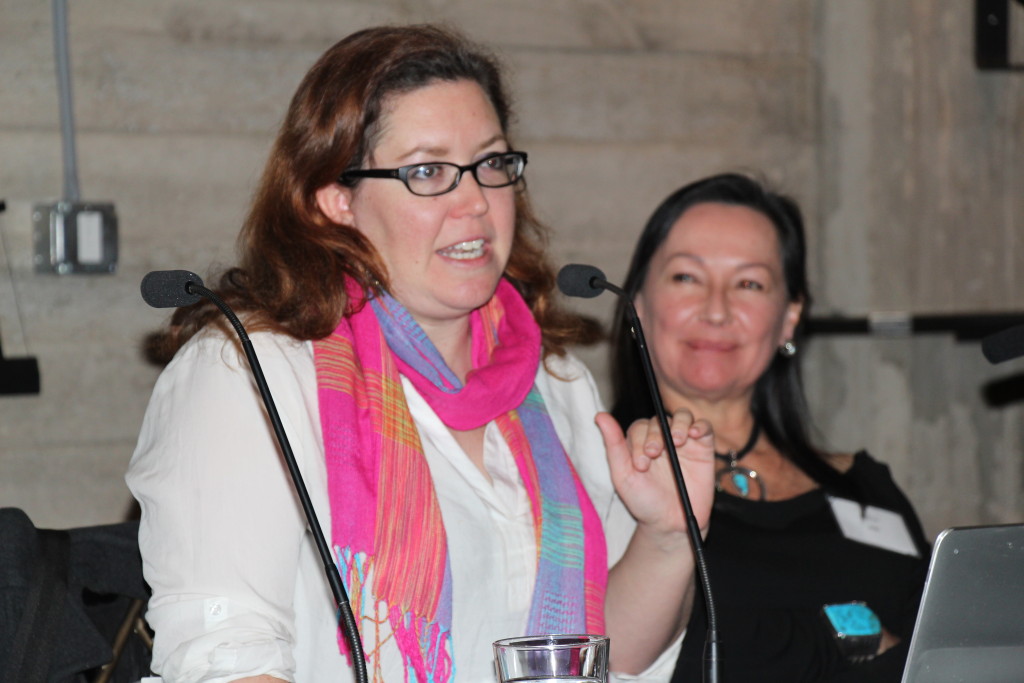 Katherine Haenschen (aka kath25), long time Kossack and editor & Publisher of Burnt Orange Report gave Kossacks the good, the bad, and the ugly about the current legislative session. She pointed out that Democrats do not have the numbers to stop much. They do have the numbers and tools to slow down bad laws from being enacted. 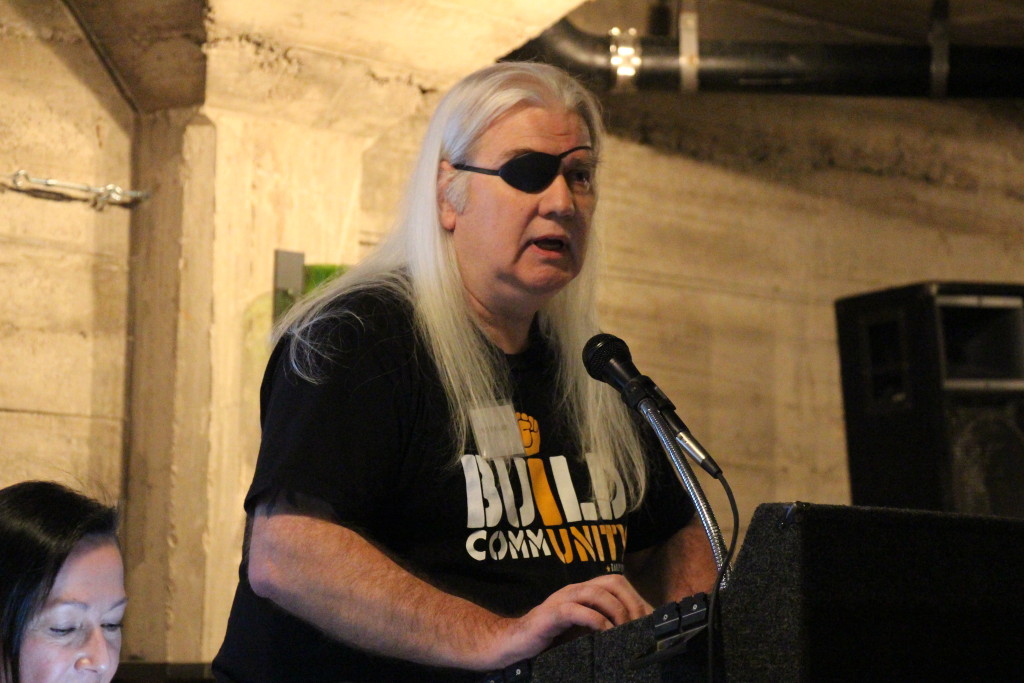 DailyKOS Senior Political Writer Meteor Blades in his typical ‘take no prisoners’ approach detailed the power of year round organizing precinct by precinct. For him it is not a theory. He along with his posse did it with a few selected precincts where they showed measurable increased voter turnout. He urged Kossacks to work within or without the Party. Just get the damn job done by talking to the folks in the precinct. 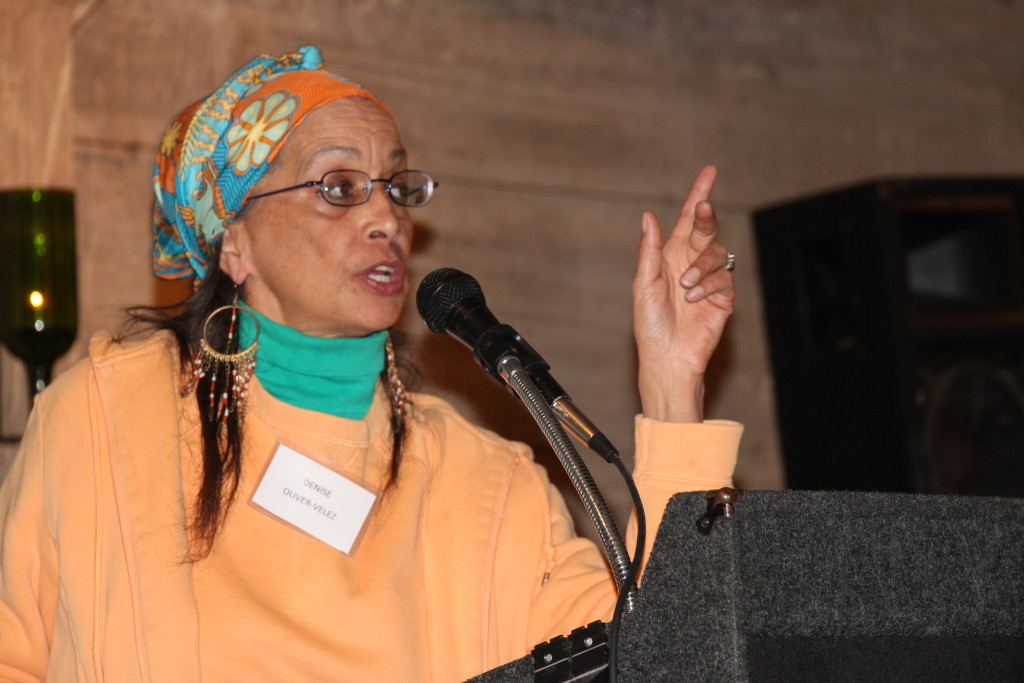 DailyKOS Contributing Editor Denise Oliver-Velez, gave an impassioned speech about reaching Latinos and others. Oliver-Velez used the Lucy Flores story to illustrate how unconventional candidates can not only win but energize an otherwise dormant electorate. It is all about speaking to communities in a manner that makes engagement meaningful and productive. 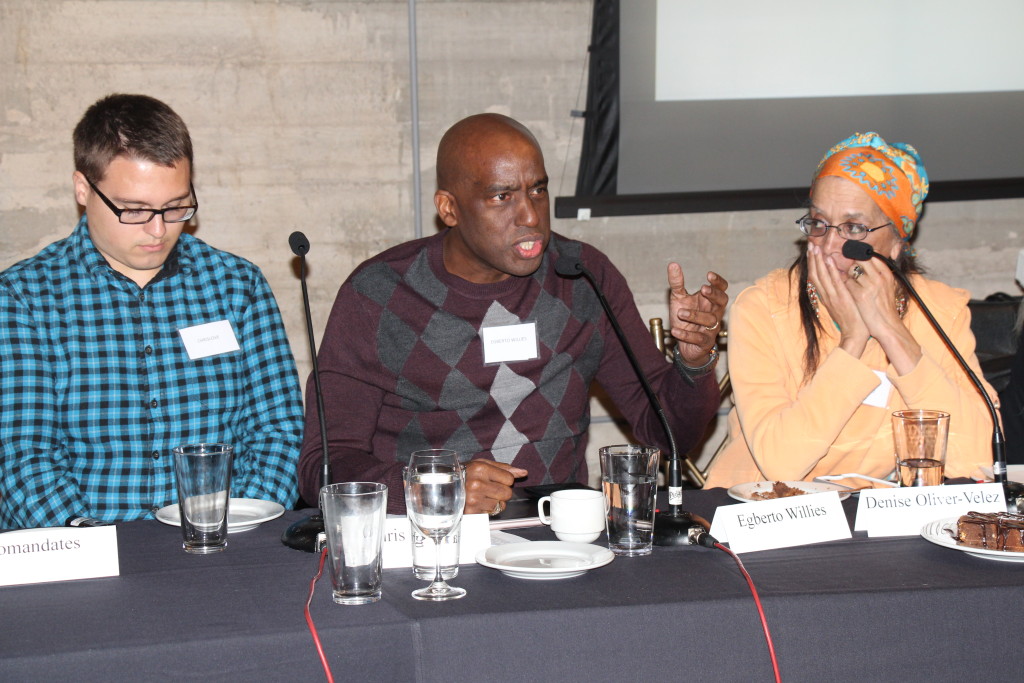 DailyKOS Contributing Editor Egberto Willies discussed how to attract more readers to our messages. He gave examples of techniques that can attract audiences not necessarily in-tuned with our message. Giving them the space to engage on their terms can actually be more productive than hammering them over their heads with the ‘realities’ we know to be true. We can use from Rush Limbaugh to Jon Stewart in strategic ways to get our message across. 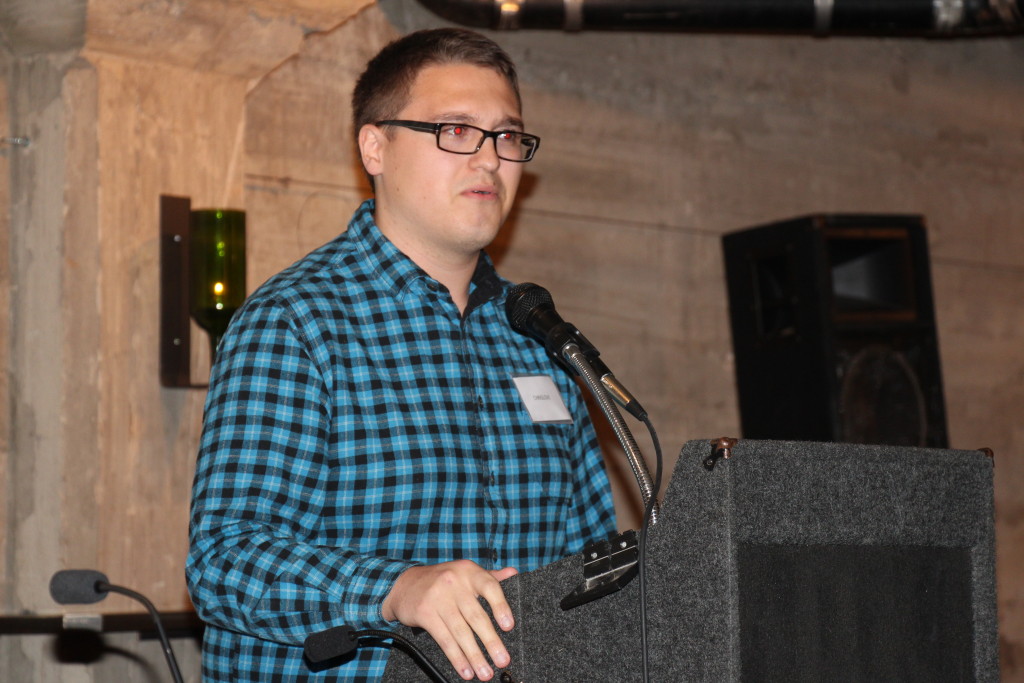 ChrisLove was the final speaker on the panel. He gave Kossacks directions on establishing their regional Texas KOS groups.

There was a lot of involvement from the Kossacks attending the seminar/meet-up. The participation led to great ideas from our Kossacks.

TexMex reminded us all how effective the DailyKOS site/platform is in not only getting a message to millions but by encouraging millions of Americans to act on specific issues. She gave an example of one of her diaries that was instrumental in raising over $130,000 for a worthy cause. 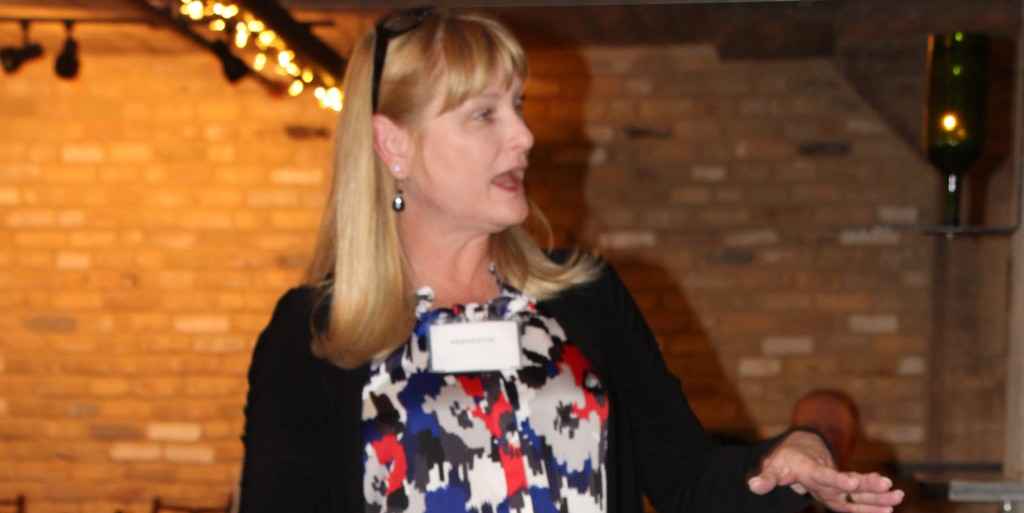 Many more Kossacks got up and spoke. They asked the panel many questions. Most importantly many had ideas to share.

The Texas KOS meetup/seminar was effective. Kossacks got a chance to interact with many known solely via handles on the DailyKOS site. Meeting in person added a level of common purpose one can only get in meetups like this.

DailyKOS is well ahead of the game in making the DailyKOS more than just the most prolific Liberal blog. It continues to build a community that is active and impacting to our body politic.