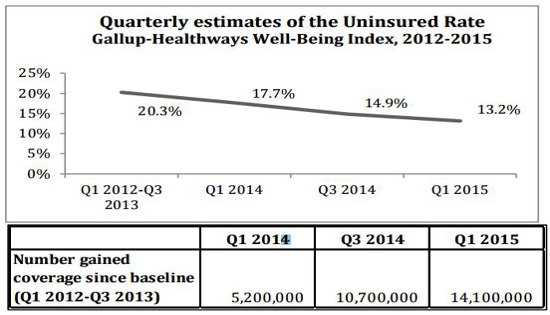 This weekend Ted Cruz was ‘stumping’ in New Hampshire and said that Obamacare is a train wreck. Republicans continue to rail against this law that has helped millions of Americans. The numbers that continue to come out on the effectiveness and success of the act continue.

It is poetic justice that a few days after Ted Cruz lied to Republicans in New Hampshire about the state of Obamacare that yet another positive Obamacare report would emerge. This particular report covers the progress made since the inception of the Affordable Care Act. The numbers are astounding.

16.4 million Americans gained access to health insurance. Most gained that insurance via the Affordable Care Act Health Insurance Exchanges or through the Medicaid Expansion.

According to the Office of The Assistant Secretary for Planning and Evaluation,

Whenever there is a hiccup effecting any part of Obamacare, the mainstream media takes its cue from the Right Wing and blows it up completely out of proportion. So as Republicans continue to lie to the American people and as the media continues to ignore the realities of the Obamacare, the citizenry remains confused.

It does not have to be that way. Make sure to share this type of information. The mainstream media refuses to share it in a responsible manner. Be the media they refuse to be.