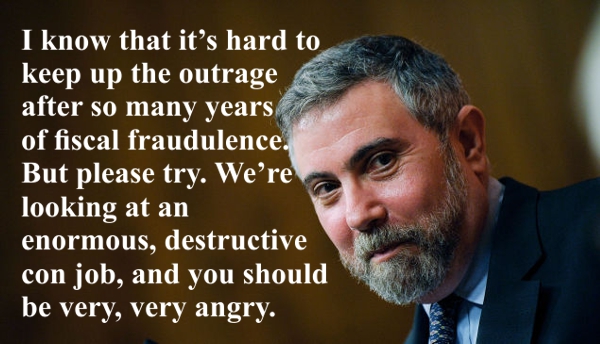 Paul Krugman’s piece, “Trillion Dollar Fraudsters”  in the New York Times on the two Republican budgets is a must read. The fraud perpetrated on the American citizenry may actually fit the definition of being traitorous. It would destroy this nation.

By now it’s a Republican Party tradition: Every year the party produces a budget that allegedly slashes deficits, but which turns out to contain a trillion-dollar “magic asterisk” — a line that promises huge spending cuts and/or revenue increases, but without explaining where the money is supposed to come from.

But the just-released budgets from the House and Senate majorities break new ground. Each contains not one but two trillion-dollar magic asterisks: one on spending, one on revenue. And that’s actually an understatement. If either budget were to become law, it would leave the federal government several trillion dollars deeper in debt than claimed, and that’s just in the first decade.

Paul Krugman did not mince words. This Nobel Prize winning economist has had enough.

The modern G.O.P.’s raw fiscal dishonesty is something new in American politics. And that’s telling us something important about what has happened to half of our political spectrum.

So where exactly is the immorality, dishonesty, and deception in the House and Senate Republican budgets?

Paul Krugman picked up on the theme that in our time this vast fiscal and policy deception is now almost exclusively on the Right.

It’s very important to realize that this isn’t normal political behavior. The George W. Bush administration was no slouch when it came to deceptive presentation of tax plans, but it was never this blatant. And the Obama administration has been remarkably scrupulous in its fiscal pronouncements.

Krugman made the following observations that should give us all pause.

So, no, outrageous fiscal mendacity is neither historically normal nor bipartisan. It’s a modern Republican thing. And the question we should ask is why. …

But I’m partial to a more cynical explanation. Think about what these budgets would do if you ignore the mysterious trillions in unspecified spending cuts and revenue enhancements. What you’re left with is huge transfers of income from the poor and the working class, who would see severe benefit cuts, to the rich, who would see big tax cuts. And the simplest way to understand these budgets is surely to suppose that they are intended to do what they would, in fact, actually do: make the rich richer and ordinary families poorer.

Paul Krugman ends his piece almost begging for an eruption of populist anger.

Look, I know that it’s hard to keep up the outrage after so many years of fiscal fraudulence. But please try. We’re looking at an enormous, destructive con job, and you should be very, very angry.

Americans must start playing a role in the budgetary process. There is the People’s Budget one can latch on to. It is a budget that invest in people while really bringing our budget deficits under control. There are no smoke, mirrors, deception, dishonesty or immorality within.