Chris Matthews calls out the GOP

Few journalists are willing to succinctly call out the GOP for exactly what they are attempting to do. They are using and creating bad laws to steal elections.

There are two specific methods being used. The first is gerrymandering. Gerrymandering is used to pack a few districts with Democrats thus allowing the majority of districts to have a slight to substantial majority of  Republicans. This allows for a Congress where there is a Republican that does not reflect years of Democrats receiving vast majorities of the actual votes. The graphic below illustrates what occurred in Pennsylvania. 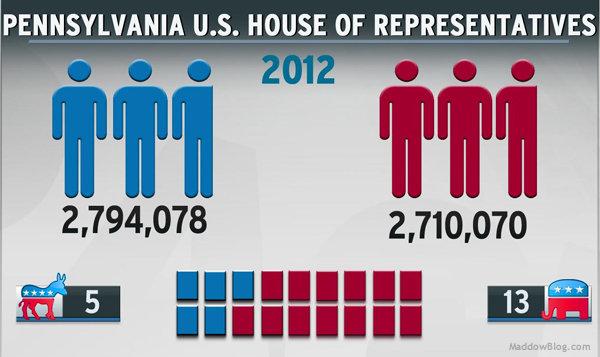 In 2012 Democrats won thousands more votes than Republicans. Yet Republicans received more than double the amount of representatives in Congress. This has also been replicated in state legislatures. This was the first part of the process.

Now that Republicans control most of the legislatures undemocratically, they have allowed them the wherewithal to implement the second part. That second part takes America back to the Civil Rights days. It is deeper than simply voter suppression. It is voter prevention and voter repression. This is not new. Who can forget Chris Matthews highlighting Republican State Representative Mike Turzai (R-PA) statements to that fact?

Chris Matthews brought it all together in the clip above. He calls it “the Republican strategy to offset demographic change.” He explains it as follows.

“We in the US have a growing minority population, a younger minority population that will over time convert the number of white Americans into a minority of the population,” Chris Matthews said. “If you are a Republican how do you deal with that quandary, giving the fact that your Party builds its numbers on older white people. You make it harder for minorities to vote.”

And that is what all Americans must ensure does not happen. Everyone in our melting pot must have equal access to the vote. Will more journalists make this an issue and hold the Republicans to account? They likely won’t but you must.