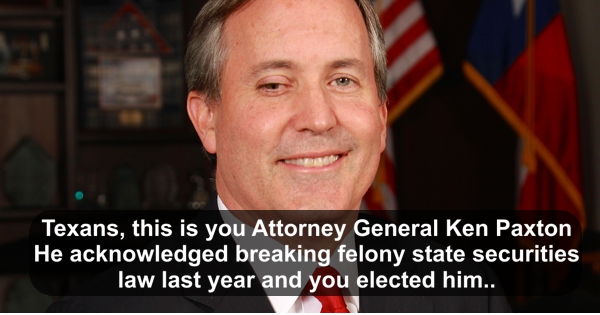 The Dallas Morning News is calling for a special prosecutor to investigate Texas Attorney General Ken Paxton. What is the issue?

The Dallas Morning News scolded the citizens of Texas for voting a severely flawed candidate into office even though they were warned.

The state’s top law enforcer, Attorney General Ken Paxton, also happens to be an admitted law breaker. That fact failed to deter Texans from electing him to the office in November despite warnings from this newspaper and others that Paxton’s record could come back to haunt him.

Paxton admitted in writing to the Texas State Securities Board in May that he violated the law by soliciting investment clients and accepting fees on commissions without having first registered with the securities board. Under state law, failure to register is a third-degree felony.

The Austin-based group Texans for Public Justice asked Travis County DA Rosemary Lehmberg to look into the case but she determined that Collin County was the appropriate venue.  Sadly Ken Paxton's good friend Greg Willis is that County's DA which makes it a conflict of interest. A special prosecutor is essential to investigate Ken Paxton. Public pressure is essential lest our politicians will continue to use their perceived affiliation with the state as a launching board to their enrichment.