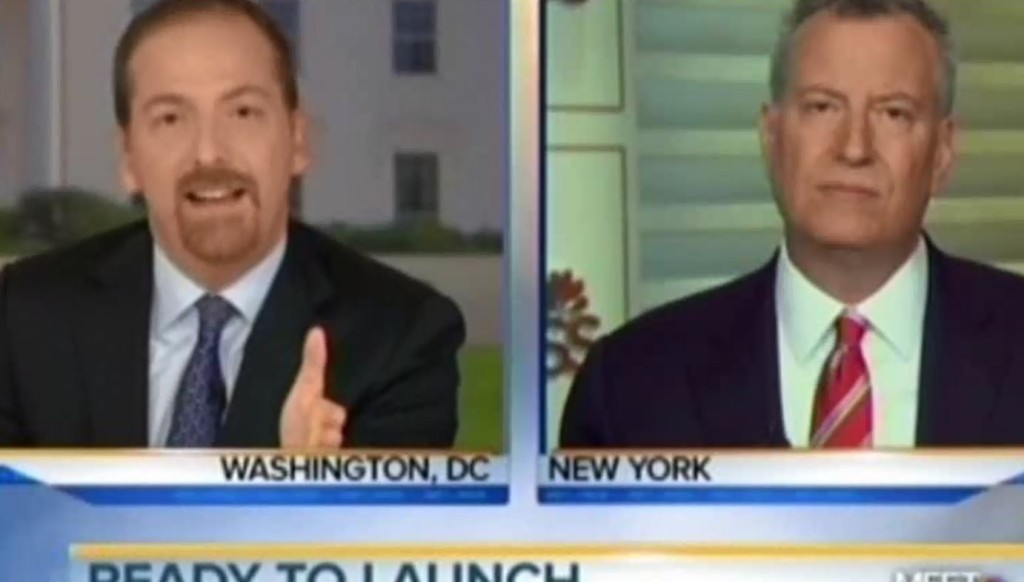 One wonders how many extrapolated the words within Bill de Blasion’s intervew on Meet the Press with Chuck Todd today. Could it be wishful thinking by Progressives? To be clear, Democrats are yearning to elect a woman into the presidency not simply to make the necessary point that the office is open to all, but to bring a new direction to the country. They want a direction based on the empathy women can bring on difficult issues given that this country has forced them to live most of its difficulties.

Chuck Todd started the interview playing the part of the Right Wing by highlighting their assault on Hillary Clinton. He played a Rand Paul ad that attacked Hillary Clinton as being the candidate of yesterday. He followed that by providing a narrative to seemingly justify the Right’s assault.

“Presidential campaigns are about the future,” Chuck Todd said. “Her last name obviously signifies the past. How does she deal with that.”

In Chuck Todd’s mind the wife is but an appendage of the husband. Does that not sound familiar?

“I think the substance and the vision does it,” Bill de Blasio said. “Look, Rand Paul and the Republicans at this point are the party of trickle-down economics. And that has failed the American people. Too many Democrats have not offered an alternative. You know I believe strongly that’s what happened in 2014. Democrats did not offer a Progressive economic vision. And voters didn’t move to Democrats. In fact Democratic voters stayed home because they didn’t hear anything meaningful from their fellow Democratic candidates. So I think there is an opportunity here to beak with the past, break with what’s wrong with Washington by offering a bold vision that actually talks to what the American people are going through. Look, Progressives around the country are saying this. This in effect has created almost a primary-like dynamic on the substance. Progressives are demanding from all of our candidates an actual vision on economic change. We had a meeting of Progressive leaders at Gracie Mansion last week. We are going to offer next month a Progressive contract with America to say if you are serious you have got to be ready to tax the wealthy. You have got to be ready to raise wages and benefits. You have got to be ready to have tax fairness in this country. And I think that is a chance to say hey we are going to break with a Washington formula that failed the people of this country over the last quarter century.”

Chuck Todd did ask a probative question that should give pause. “Are you for her now,” asked Chuck Todd. “Unequivocally or do you want to wait to see if she takes your advice on moving to a more Progressive agenda?”

“I think like a lot of people in the country,” Bill de Blasio said. “I want to see a vision. And that would be true of candidates at all levels. It’s time to see a clear bold vision for Progressive economic change.”

“You are technically not endorsing her,” Chuck Todd pushed.

“No. Not until I see — again I would say this about any candidate — till I see an actual vision of where they want to go,” Bill de Blasio said.

He went on to say that she is one of the most qualified people to run for the office and she is fully vetted. But he won’t endorse till he sees a vision.

Bill de Blasio has been consistent. He has a vision. He has a vision that is well articulated. Listen to the passion of the message and vision here.  If more Americans heard his vision it is likely he could form a coalition that is larger than that of President Obama as it is less compromising on middle-class centric values.

There is a benign threat for Hillary Clinton in his message. If she does not become the arbiter of real Progressive change, Bill de Blasio just might be the one.