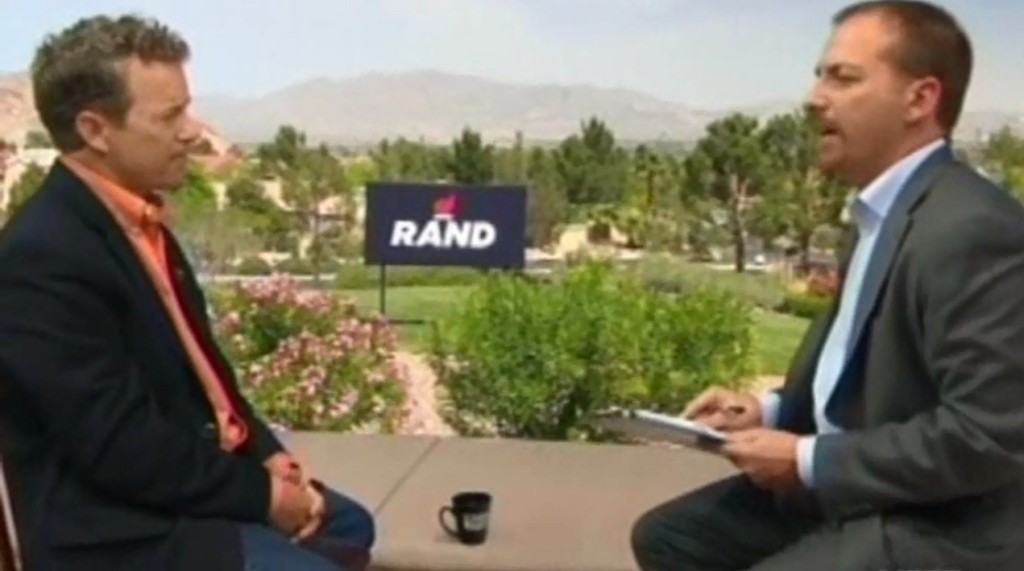 Chuck Todd interviewed Rand Paul in Las Vegas recently. He did not disappoint in following the Chuck Todd doctrine, the constant appeasing of the Right by the traditional mainstream media. Rand Paul has been demonstrably sexist and condescending to women journalists when faced with legitimately tough questions. Yet in the video below, Chuck Todd gave him an out with the wording of his questions and his mid-answer assertions.

"This week there has been a lot of attention to some of the interviews you've had," Chuck Todd said. "One or two have been contentious, one with my colleague Savannah Guthrie." So far so good. But then he had to interject the following narrative of appeasement. "This has been men and women by the way," Chuck Todd appeased. "Do you think you have to grow a thicker skin?"

Rand Paul responded initially with a funny reply to a serious deficiency. "It depends on when you get me. I've had my coffee." Chuck Todd actually took the bait. "Are you not a morning person?" Who cares. A President must be an early morning, late night, mid-morning, late-afternoon, and everything in between person. If that was a serious response who should have immediately segued into Rand Paul's temperament.

Rand Paul's real answer was that he did not like to answer questions that probe his past statements. He thinks that asking those questions is biased. What was Chuck Todd's interjection? "Welcome to the NFL." Rand Paul then went on to state that "Some interviewers could be better sometimes and I think also politicians could be more tolerant of interviewers." Chuck Todd then changed the subject.

In effect Chuck Todd threw Savannah Guthrie and all women journalists under the bus. He allowed Rand Paul to spin his obvious sexism as simply a disgust with journalists at large as opposed to the act of condescension with which he treats women journalists.

NOTE: What's that with the well position RAND banner advertised perfectly in the center of the frame? Is this free advertising that the FEC should look into?