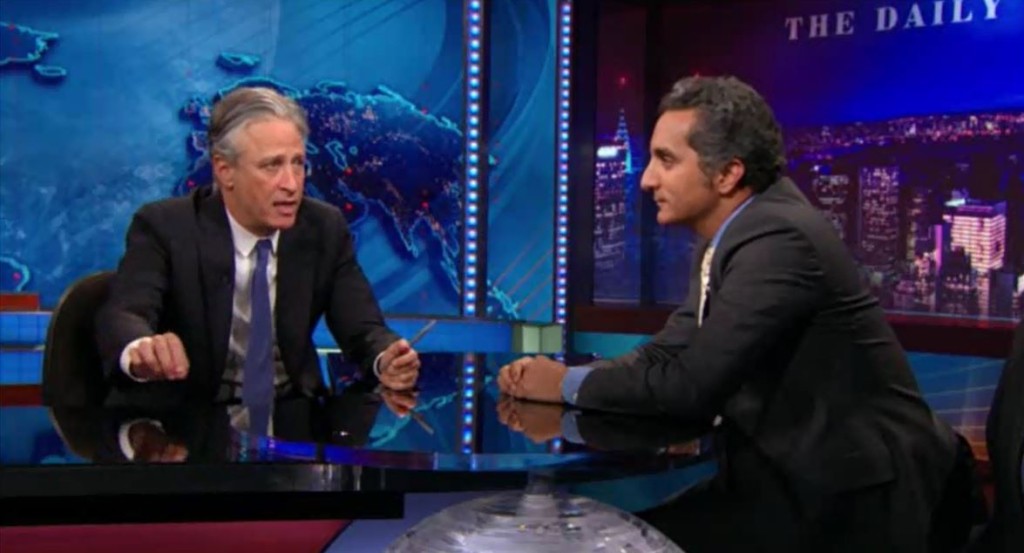 The Middle East is in turmoil. The genesis of that turmoil is multifaceted. Past colonialism, foreign governments intervention, greed, religion, and many other factors are all responsible. Bassem Youssef appeared on Jon Stewart's Daily Show, not to explain causes but explain the realities of the complexities within the region.

"There are so many parts and wars going on in the Middle East it almost appears that we are fighting ourselves," Jon Stewart says. "To help us understand the various angles of operation 'Sandy Quagmire' we are joined by Senior Middle East Correspondent Bassem Youssef."

Jon Stewart pointed out that America is fighting ISIS and Al Qaeda, trying to keep away nuclear weapons from Iran, and involved in a proxy war in Yemen on the side of Iran. He wants to know who is actually coming to kill Americans.

Youssef  responded that none of them are interested in coming to kill Americans. He pointed out that the different factions that are fighting each other for historical reasons having nothing to do with America. He calls this fight within the different factions Constant Intractable Madness (a spoof on March Madness).

Jon Stewart asked who will ultimately win. "The same people who always win," Bassem Youssef  said. "The guys who run the game."

In other words, the Military Industrial Complex always win. While this was a funny tongue in cheek piece, it has a rather serious message. Blow back from our dishonest engagement in the Middle East is the real danger to Americans. However we remain engaged because our Military Industrial Complex profits from the engagement. We supply all sides. Peace is not profitable for these companies.

How shortsighted however. If we changed from a military economy to one that builds at home it would be much more profitable. It would increase the national worth. But it means that those who invested in war would lose profits as those industries retool. Anyone wonders why the 47 Republican Senator are attempting to derail the beginning of real negotiations in the Middle East in general and Iran in particular?