Infrastructure Spending and Regulations Could Have Prevented This 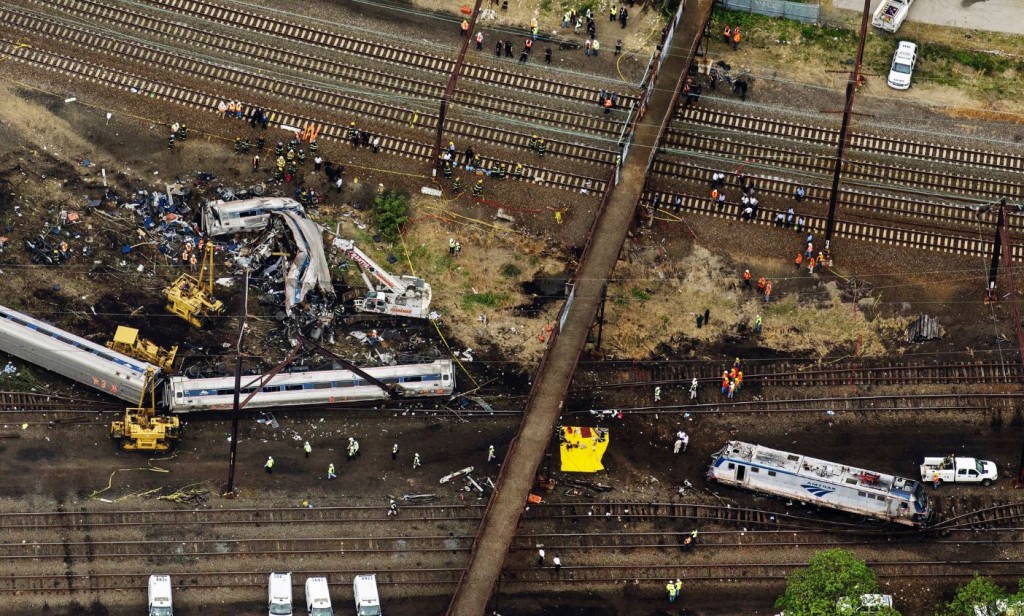 It is likely this news from a bipartisan group of mayors urging Congress to invest in the nation's infrastructure will go unnoticed. Our bridges are falling down or they are in disrepair. Our rail system is at best antiquated with poor regulations that allow speeding trains to derail because of lack of proper or prompt regulations. The train derailment that killed at least 7 people in Philadelphia could have been avoided. Robert Sumwalt, a board member of the NTSB said that had the Advanced Civil Speed Enforcement System(ACSES) been installed, the accident would not have occurred. What is ironic is that the Republican Congress is cutting 250+ million from the under funded Amtrak.

It is time that Americans force Congress to support our mayors and citizens. It is time to rebuild out infrastructure. Call your political representatives.

Washington, D.C. – In a bipartisan effort led by New York City Mayor Bill de Blasio, who Chairs The U.S. Conference of Mayors’ Cities of Opportunity Task Force, and U.S. Conference of Mayors Second Vice-President Oklahoma City (OK) Mayor Mick Cornett, more than 100 mayors around the country -- including 30 mayors who traveled to Washington, D.C. today --urged Congress to enact a long-term renewal of the federal transportation law that significantly increases investment in our roads, bridges, and transit and directs more funding to meet the infrastructure needs of cities and their metropolitan regions.

Mayors are particularly concerned because current federal transportation funding -- Moving Ahead for Progress in the 21st Century (MAP-21) -- is set to expire on May 31.

In addition to meeting with a number of members of Congress, including U.S. House of Representatives Transportation and Infrastructure Chairman Bill Shuster, Democratic Leader Nancy Pelosi, Senate Minority Leader Harry Reid, Senate Committee on Rules and Administration Ranking Member Chuck Schumer and Chairman of the Senate Environment and Public Works Committee James Inhofe, who has jurisdiction over the bill, the mayors held a press conference on Capitol Hill to call for a long-term renewal bill with increased resources and more locally-directed funding to address the growing needs in cities where populations are steadily rising.

“U.S. metropolitan areas contribute significantly to our national economy and quality of life, generating 90 percent of the nation's GDP and representing 85% of its population. Cities and their metros are expected to account for 92% of the nation's future economic growth and attract 66 million more people over the next three decades." "This growth will bring dramatic and increasing pressures on our transportation systems,” said USCM Second Vice President Oklahoma City Mayor Mick Cornett. “We need a strong long-term renewal bill so our cities and metro areas can continue their current trend of driving the national economy forward.”

The mayors also highlighted the critical importance of investing in and modernizing America’s infrastructure systems, which are essential to our economy, and explained that the country’s outdated transit, highways, streets and bridges are a drag on our national recovery – and present a once-in-a-generation opportunity to drive job and wage growth, manufacturing, trade and global competitiveness.

"This bipartisan coalition is here in Washington, and in districts around to country, fighting for increased funding for our transit, roads, and bridges -- because nothing less than our safety and economic future are at stake," said Mayor de Blasio. "New Yorkers feel the lack of investment every single day, from subways too crowded to even board, to century-old bridges in dire need of repair. We shouldn't be standing on the brink of the next crisis. The time for Congress to act is right now, by passing a long-term bill that increases funding and directs more to cities and our vital infrastructure needs."

The mayors pointed out that cities and localities are becoming more and more dependent on federal transportation funding to maintain vital highway and transit networks, with transit ridership reaching record highs. They warned that current funding levels fall woefully short of what is needed to meet the current demands of $50 billion annually, much less grow these systems.

Finally, the mayors noted that infrastructure investment generates good jobs for workers in local communities. Every $1 billion invested in federal transportation spending supports 13,000 jobs so clearly improving our transportation infrastructure will generate jobs and help more people to participate in the economy, increase competitiveness, and ensure residents can get safely to work, school, child care, medical visits and stay connected to family and friends.

“It is our firm belief that local elected officials who are responsible for the vast majority of the nation’s transportation system are best suited to direct available transportation resources to projects that best serve their communities and regions,” commented USCM CEO and Executive Director Tom Cochran. “They know the local need and they clearly understand how expanding transportation options can improve the quality-of-life for people in our nation’s cities.”