These ten Democrats did the right thing then … 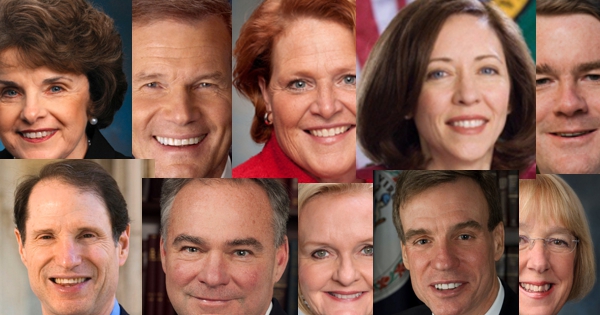 Yesterday these ten Democrats did the right thing. They voted (through a procedural vote) to prevent President Obama from receiving the Fast Track Authority to negotiate yet another trade deal, the Trans Pacific Partnership (TPP). What is Fast Track Authority? This allows the President to negotiate a deal on his own virtually unimpeded. When it is time to ratify, Senators get an up or down vote. They get no opportunity to modify the agreement.

Why does that matter? The past is prologue. The American worker has come out at the short end of the stick for every trade agreement from NAFTA, to CAFTA, to the most recent agreements with Korea, and Panama.

Why would any trade agreement negotiated by corporate lobbyists and lawyers be beneficial to workers. Workers are on the expense side of the ledger. The fiduciary responsibility of the negotiators is not to the American worker. Their fiduciary responsibility is to the maximization of shareholder profits. Profits are maximized by reducing or stagnating wages in the aggregate. That has been the results of automation and trade deals. Workers overseas make much less than the American worker. These trade agreements are tantamount to wage suicide.

According to Politico, these 10 Senators, Ron Wyden (D-OR), Michael Bennet (D-CO), Maria Cantwell (D-WA), Dianne Feinstein (D-CA), Claire McCaskill (D-MO), Patt Murray (D-WA),cBill Nelson (D-FL), Tim Kaine (D-VA), Heidi Heitkamp (D-ND), & Mark Warner (D-VA) are about to cave. They are about to pave a new path for the destruction of middle-class wages and many of the rights of American citizens.

The Senate’s trade war lasted just about a day. After Democrats engineered a stunning defeat of President Barack Obama’s push for new trade deals on Tuesday, negotiators hashed out a compromise that offered both parties a way to save face without scuttling the administration’s trade agenda. At the least, the agreement means the Senate is likely to pass new powers for the president to fast-track trade pacts through Congress.

But Democrats failed to guarantee enactment of their priorities by attaching them to the fast-track bill. Instead, Democratic measures that would crack down on currency manipulators and expand trade with Africa will get stand-alone votes on Thursday. The currency provisions, in particular, face an uncertain future in the House even if they pass the Senate and are unlikely to become law.

It’s not over yet. You can find the telephone numbers for all these Senators here. Call them and tell them not to betray the American worker.