We must all say NO to the TPP 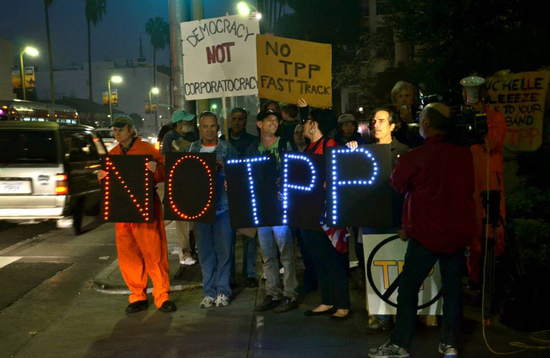 A few weeks ago the question was What game is Obama playing with the TPP? A bargain? A ruse?. That question is yet to be answered. After all, should the American worker fear a presumably progressive president who has expanded the social safety net for all Americans?

This week, President Obama suffered an initial defeat when all but one Democrat voted to block consideration for giving him fast track authority. Did the corporatist wing of the Democratic Party finally listen to the progressive base for a change? Of course not. It was just a ploy to destabilize the activists.

It took less than three days for the corporatist Democrats to show their true colors. According to the Huffington Post:

The Senate passed a pair of trade protection measures Thursday, and voted shortly afterward to start debate on the fast-track bill that President Barack Obama needs to secure his massive and controversial free-trade initiatives with Asia and Europe.

There is no reason to believe that the president will not prevail. One wonders why President Obama has been so persistent in wanting the fast track authority. According to Lori Wallach, director of Public Citizen’s Global Trade Watch, and contrary to some of the prevailing narrative, the fast-track authority has only been in effect five of the last 20 years.

“This current fast track that is up in Congress now,” said Wallach when reached by phone Thursday. “If Congress were to pass that, for six years, whomever is president can unilaterally pick any country to launch trade negotiations with. Congress gets no say over the right country, potential good export partner, wrong on human rights abuses, the president starts by himself/herself. Then the president gets to set the content. The president gets to sign and enter into the damn agreement before Congress ever votes on the content.”

“And all of that is allowed,” Wallach explained, “whether or not the president meets Congress’ negotiating objective. And then whether or not the president meets Congress’ objective for what’s supposed to be in the agreement, the White House gets the right to unilaterally write an implementing bill that that can rewrite wide swath of U.S. law. It does not go through committee markup. So you can stick anything into this bill. And that gets a guaranteed vote, plus the approval of the agreement in 90 days after the signing of the agreement and submission, no amendments allowed. It is a veritable legislative lose run.”

Wallach went on to enumerate all that is wrong with the TPP from what has been leaked thus far, with one thing that stands out. Much has been made about the investor state dispute settlement provisions. Most of the concern was about our local laws being undermined by foreign corporations as they sue municipalities and other governments for “lost profits” under those regulating laws.

Wallach added an angle that isn’t much discussed. “The TPP would make it easier to offshore American jobs,” she said. “Because thanks to WikiLeaks, we know it includes those NAFTA investor protections that basically eliminate the risk normally associated with moving American jobs to low-wage countries. These investment rules … well, the Cato institute, the free trade libertarian Cato Institute, calls them a subsidy on offshoring. It is why we lost so many jobs under NAFTA.”

President Obama has said that Elizabeth Warren was wrong about the TPP weakening Dodd-Frank. Interestingly, Canada just proved her right. According to the Huffington Post:

Most Republicans and corporatist Democrats are enamored with trade agreements that fill the coffers of their plutocratic puppeteers. The Trans-Pacific Partnership agreement will come to pass unless progressive activists speak not only to the intellect of the citizenry, but to their hearts and their fears.

Trade agreements with all countries with low wages will by definition lower American wages. The math and economic logic is absolute. Moreover, the past is probative.

As Wallach pointed out, “An agreement like the TPP both as a matter of economic theory and as a matter of the history of what similar past agreements have done, will lower U.S. wages, full stop. Will increase income inequality, full stop. And by the way when you have trade liberalization between a wealthier country and a less developed country, it is actually standard macroeconomic theory that you would reduce wages in the richer country. And the way it is described is you redistribute income upward. Investment goes to capital, not the worker, because basically you are going to shift investment to the poorer country, making it more profitable for capital but bad for labor.”

For more information on the Trans-Pacific Partnership, visit TradeWatch.org (very technical) and ExposeTheTPP.org.

It is time that progressives go all in with a populist agenda. Forget about trade agreements. They serve a purpose for corporate profits only. The worker is but a commodity in the equation. Revamp our wealth-biased tax structure. Revamp our social safety net. Invest fully in accessible education. Re-invest in our infrastructure. Effect a single-payer healthcare system, the only mathematically provable efficient system. The progressive narrative for that agenda must be test marketed just like conservatives test market their ideas. The difference is truth—and real American values are on our side.

For the full interview of Wallach, listen below: