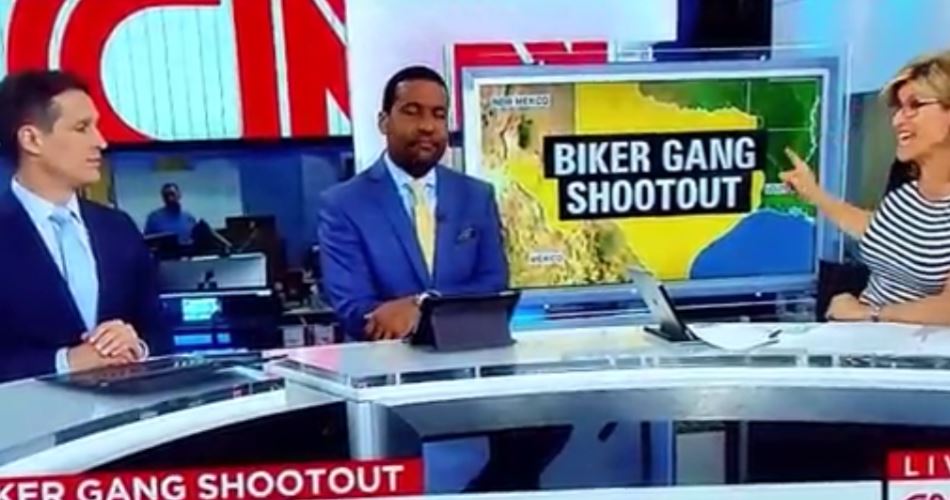 In the last few days America witnessed something many have been stating for decades. The media coverage and interpretation of events is demonstrably race based.

I walked into my home from after blogging for five hours at Starbucks. My daughter was in the couch with her face pasted on her Twitter feed on her phone.

“Dad, what is going on at Twin Peaks?” She asked.

“Nine people got killed in Waco,” she said. “There are rival biker gangs shooting and stabbing each other and shooting at police.”

Everyone knows that especially on a slow news day the most mundane gets covered as breaking news. So what happened here? Nine human beings were killed, murdered in a gang fight. Gangs were reportedly shooting at the police. It was mayhem. It was extremely violent behavior.

The riots in Ferguson had many casualities. The riots in Baltimore had many casualties. There was incessant coverage as breaking news. But it was the display of those inner city people acting violently that made the news, a disparity.

My daughter went from surprise and apprehension to disgust about the coverage to humor. You see, her Twitter feed started to light up with many people talking about the irony of the coverage and the police response. She just sat there shaking her head at the comments.

She started reading them as I shook my head in a sort of sad resolve. I told her she should create a blog post with a representative sample of the tweets and a few thoughts. In fact it is a duty to point out the media bias as it is happening. She purposefully gave her post the provocative title “White on White Crime Terrorizes Waco in Twin Peaks Massacre.”

The next morning my daughter messaged me with a story from News.Mic by Jon Levine titled “One Tweet Shows the Hypocrisy of How the Police Treats White Criminals.” He writes,

On Sunday, members of two rival biker gangs began an altercation at a parking lot in Waco, Texas, after a fight escalated between the groups inside a local restaurant. The confrontation left nine dead and 192 arrested before police were able to regain control.

Photos posted on Twitter showing how the arrests went down are now causing controversy online due to what some are saying is the very casual demeanor of officers and suspects. As one Twitter user pointed out, comparing what happened after a mass shootout in Waco to a man walking home last August in Ferguson, Missouri, paints a clear picture.

Americans have a very distorted view of crime and who commits it. Many love to read FBI stats that show the criminality of one group being higher than another. The reality is that the data is compiled from those on the ground who make initial contact. If initial contact for a ‘crime’ results in an arrest it is recorded. If initial contact for a crime results in a warning and a slap on the wrist it is not. The disparate manner in which police interact with different groups makes FBI stats or any of these stats at best suspect and at worst cooked.

In my mostly white suburb I see kids and adults alike get away with police encounters that would otherwise land many ‘others’ in jail. A few years back there were four white teenage girls who were holding up convenient stores in the area. When the girls were caught, the coverage was sympathetic as the media attempted to find out what went wrong.

The occurrences in Waco, Texas were probative. The impression Americans initially got was that there was just some biker gang violence. An extensive analysis of any type of criminality, systemic or otherwise, was initially ignored. In Ferguson and Baltimore inferences and misinformation that in effect exacerbated the unrest were the modus operandi of both the media and the police. When CNN’s Ashleigh Banfield called out the bikers as gangstas and thugs it was at best a forced accommodation.

One wonders if the outcry in social media was responsible for a decidedly new framing and tone that occurred in the traditional mainstream media 24 hours after the event. Our media coverage and police response distort the American reality. In distorting that reality it willfully stereotypes and divides society.