Ethnic cleansing in the Dominican Republic

This is an important story that very few are talking about. It is equivalent to ethnic cleansing right in our backyard. The DailyKOS article below is a must read on what is going on in the Dominican Republic. Please read and please share.

Dominican Republic to be 'Socially Cleaned' in two days 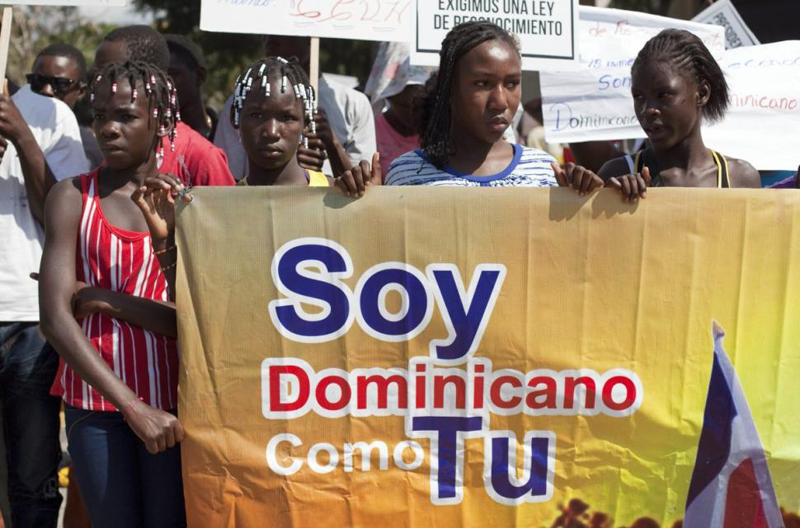 In two days about a quarter of a million people will be made stateless. They will have no homes, no passports, and no civil rights. There are several reasons for this, but the primary reason is racism.

At issue is a ruling by the Constitutional Court in the Dominican Republic to strip away the citizenship of several generations of Dominicans.

According to the decision, Dominicans born after 1929 to parents who are not of Dominican ancestry are to have their citizenship revoked. The ruling affects an estimated 250,000 Dominican people of Haitian descent, including many who have had no personal connection with Haiti for several generations.

What we are witnessing is one of the largest humanitarian crisis in the western hemisphere, except this one is completely by choice.

As a recent Peace Corps volunteer in the DR, stationed near the border of Haiti, I have a very personal perspective on this issue.

This may be hard to believe for most Americans, but racism in the DR is much worse than racism here in the United States. The idea of being black in the DR is wrapped up with being Haitian, and then takes on a xenophobic quality.

The thing is, 90% of Dominicans would be considered 'black' by American standards. So there is a huge difference between being considered moreno (brown) and negro (black). The Policia Nacional Dominicana are so underpaid and openly corrupt that being mistaken for being Haitian means having to bribe officers (which I've personally witnessed) or be arrested and possibly beaten. Being mistaken for being Haitian means being denied job opportunities, public education, bank accounts, and health care.

In other words, being black in the DR means being a second-class citizen with no legal protections. And now it means being stateless.

The Dominican government recently opened seven deportation centers near the Haitian border, and gave them the Orwellian name of "welcome centers”.

The Dominican government has also requested 36 large passenger buses "be made available for continued use".

“This is an extremely ominous sign,” he said. “Everything is set for the deportation and that the DR government is saying it is going forth on this Tuesday, June 16.”

The US State Department has denounced the Dominican government for this plan, and pointed out that it is a gross violation of human rights according to the U.N. charter.

In February, Dominican-Haitian Henry Claude Jean (nicknamed 'Tulile'), an impoverished shoeshine boy, was found lynched in a public park in Santiago, the DR's second-largest city. His hands and feet were bound. The police were quick to blame it on the victim's 'criminal past' and "rejected racism as a motive", but it seems hard to believe that this is how criminals operate.

"For the Dominican authorities to rule out racism as a factor less than 24 hours after a man of Haitian descent was hanged in a public square is not just irresponsible policing, it is an outrageous example of discrimination endemic to the Dominican Republic," McMullen wrote to HuffPost in an email. "And frankly it is all too reminiscent of the shameful denials of Southern officials during the decades of terror lynchings perpetrated against African-Americans here at home."

The lynching came just one day after a protest in Santiago calling for the deportation of Haitians.

Dominican officials began refusing to grant copies of birth certificates to the Dominican-born children of Haitian immigrants in 2005. This was in violation of the American Convention on Human Rights.

After years of protests and legal haggling, the Dominican government began allowing Dominican-Haitians to get copies of birth certificates again, but the process was badly flawed. Thousands of Dominican-Haitians have gotten no response from application submissions even after nine months, as protesters claim.

In the Dominican Republican being born in a hospital is the exception, even for people with Dominican parents.

It's a charade. The offices are overcrowded, understaffed, and the needed paperwork doesn't exist (many Dominicans of Haitian descent were born in rural areas, since their parents came to work the sugar fields, with midwifes and not in hospitals, and were therefore never issued birth certificates).

The US press has been largely silent on this rapidly approaching disaster. Even Human Rights Watch is silent on the issue. The pope has spoken on the issue, but to berate the Dominican Republic's Catholic bishops for being silent on it.

Where will these people live in Haiti? Most of them have never been to Haiti. Haiti can't even house all of its own people. Dumping a quarter of a million people on the border of the poorest nation in the hemisphere will quickly lead to a public health disaster.

He also reports that in the barrios, police trucks have come through to conduct limpiezas ("cleanings," with the adjective implied: "social cleanings"): "The detained tend to range from intoxicated persons to suspected prostitutes, but are disproportionately Haitian or dark-skinned Dominicans with Haitian facial features. These could just be guys drinking and playing dominos or women standing on street corners. More often, though, they tend to be young men with Haitian features and darker skin.

Dominican hatred of Haitians extends back to 1822, when Haiti invaded and conquered the Dominican Republic and promptly freed the slaves.

In 1912, the Dominican government passed a law limiting the number of black-skinned people who could enter the country.

However, the racism peaked under dictator Rafael Trujillo. He was known for wearing makeup in order to make himself look more white. In 1937 he ordered the Parsley Massacre, also referred to as El Corte (the cutting) by Dominicans. It is unknown how many Haitians died in those five days, but it was in the tens of thousands.

President Joaquin Balaguer, Trujillo's right-hand man, and the dictator that the United States installed in 1966, claimed that the Haitians were trying to invade and that their secret weapon was "biological." As Balaguer put it, Haitians "multiply with a rapidity that is almost comparable to that of a vegetable species."

This story is continueously being updated here.

Unions and community groups in the Dominican Republic are shining a light on irregularities and calling for justice for migrant workers and their descendants.

According to Alexis Rosalie, representing the national coordinator for Immigration Justice and Human Rights and an organizer for the National Federation of Workers in Construction and Building Materials (FENTICOMMC), “We have proof there are people who meet all the basic requirements of the National Plan for Regularization of Foreigners (PNRE) and each time they go back to the offices, they are always told they are lacking one document or another.”

The National Confederation of United Trade Unions (CNUS) and the Support Network for Migrant Workers has condemned the discrimination against Haitians “who have made a productive working and family life in the country” and “sustain our economy,” and called for an urgent extension of the regularization plan. Many CNUS members, from domestic workers to cane workers, have been affected by the situation.

The labor movement continues to call for the Dominican government to comply with international human rights norms, and ensure Dominicans of foreign descent are given the ability to fully and freely participate in society. The United States government and the international community, including the United Nations and International Labour Organization (ILO), must use all means available to pressure the Dominican government to stop its discriminatory persecution of the Haitian community to quell a growing humanitarian crisis. Countries that flagrantly disregard human rights do not deserve financial and military assistance or preferential treatment through trade agreements like DR-CAFTA.