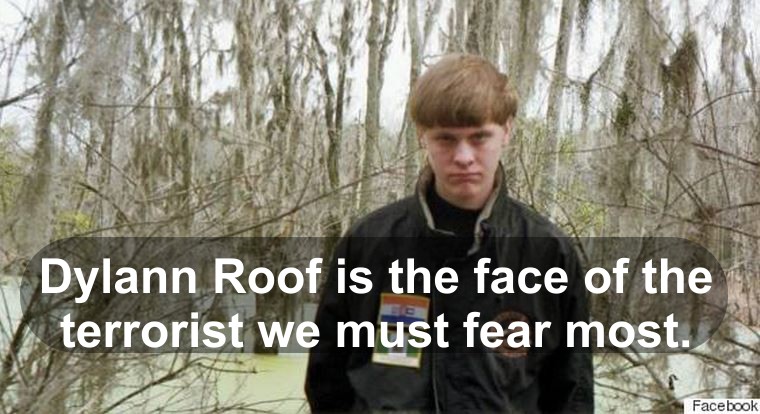 I wanted to get ahead of game and call Dylann Roof by his appropriate name. Dylann Roof is a terrorist and thankfully he was caught. I watched a lot of the reporting of the Emanuel AME Church massacre on Fox News because I wanted to see how quickly they would pivot to the mental state of this young terrorist. You see in America we qualify the definition of evil and evil acts based on certain demographic attributes.

When the proliferation of news was the purview of a select few, a select class, a select few created a reality that became THE REALITY. No more. Remember folks, the media becomes us all now. Social media, community radio, and internet radio have changed the game. You are the media. You are the truth teller. You are the rightful creator of the narrative and that's what's needed now.

It was not long before Fox News would allow the change of narrative if even subliminally initially as they went on with their business misinforming. Right Wing conservative Rich Lowry later urged their listeners not to jump to conclusions. After all, Lowry implied one does not know if Dylann Roof had a mental problem. It was that message that would attempt to move him and his terrorist acts away from his teachers in the movement, the professors in the movement, the Right Wing movement of hate for which Fox News is complicit. South Carolina State House Minority Leader Rep. J. Todd Rutherford (D) pointed that out on CNN and did not take it back as Bill O'Reilly attempted to have him do so.

It was revealed that Dylann Roof kept one of the victims alive so she could tell the story. And what story was that? The story that details why he had to murder. His Right Wing teachings had cauterized in his mind that 'those people' rape his women and he needed to take the country back. After being treated with love and respect, Dylann Roof had second thoughts about his mission according to several sources.

Is there any doubt where this programmed rhetoric is coming from? Have you ever listened to the various Right Wing politicians in Texas and throughout the country and how they refer to immigrants? How they refer to the folks they want you to believe are the causes of their failed lives? While one could wager that these politicians do not believe the hateful inferences that they are spewing,  many of their low information constituents believe these things and internalize them.

But it is deeper. The politicians stuff the minds of a vulnerable sect with fear. The politicians then create lenient gun laws, conceal carry laws, guns on university campuses, etc.. They create a new source of revenue for their gun masters.  The gun masters then monpolize on the irrational fears of the politicians' constituents. While they may hope they can keep detente in effect, what they have done is seeded terrorists. Because after all, what is a terrorist? Don't most terrorist believe what they are doing is for a just cause? Don't most terrorist believe they must free some from an injustice, real, imaginary or otherwise?

Here is the reality. ISIS, Islamic militants, or other foreign fundamentalists are not the terrorists we must fear. Those terrorist are way over there. Any appendage they may have over here is inconsequential when compared to the legally well armed Right Wing terrorists in waiting that can be found today embedded within many of the militias and white supremacist groups. Dylann Roof is the face of the terrorists we must fear. There are many of them over here.

The media and our government may attempt to qualify this event as a lone act but it is far from it. The sum total of many 'lone wolf' acts of violence based on a particular ideology is equivalent to the terrorism we call out whenever we call Islamic militants terrorists. Many more Americans have died and will die at the hands of American terrorists more so than at the hand of any foreign terrorists. The problem is no one is really looking for these terrorists within. They have attempted to redefine terrorism to exclude them. They have simply chosen not to connect the dots because the resulting drawing does not make a pretty picture.