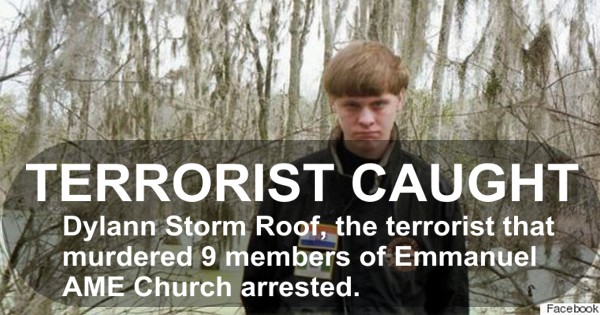 WLTX19 reports that Dylann Roof, the terrorist that murdered 9 members of the Emmanuel AME Church, was caught in Shelby, North Carolina.

Richland County, SC (WLTX) - A law enforcement source tells WLTX that the suspect in the mass shooting at a Charleston church has been arrested in Shelby, North Carolina.

The circumstances surrounding the arrest of Dylann Storm Roof, 21, have not been released yet. Shelby is located about an hour drive to the west of Charlotte.

Earlier in day, there was a heavy police presence seen in lower Richland County, South Carolina because Roof grew up in the area and has family here.

A Facebook page belonging to a Dylann Roof that matches the picture released by law enforcement said Roof at one time attended White Knoll High School in Lexington County.

Terrorism is real. The claim is we fight them over there so we won't have to over here is silly. We have always had terrorists over here. We simply chose to ignore them because they did not fit the 'proper' profile. When the Obama administration release the report stating that one of our biggest many on the Right complained. Just recently CNN reported the following.

A new intelligence assessment, circulated by the Department of Homeland Security this month and reviewed by CNN, focuses on the domestic terror threat from right-wing sovereign citizen extremists and comes as the Obama administration holds a White House conference to focus efforts to fight violent extremism.

Some federal and local law enforcement groups view the domestic terror threat from sovereign citizen groups as equal to -- and in some cases greater than -- the threat from foreign Islamic terror groups, such as ISIS, that garner more public attention.​

The Homeland Security report, produced in coordination with the FBI, counts 24 violent sovereign citizen-related attacks across the U.S. since 2010.

The terrorist involved in this killing was reported to have used the standard Right Wing rhetoric. The cousin of the murdered Senator/Pastor said one of the survivors reported that Dylann Roof said, "'I have to do it. You rape our women and you're taking over our country. And you have to go.'"