More Liberals in Texas than most think 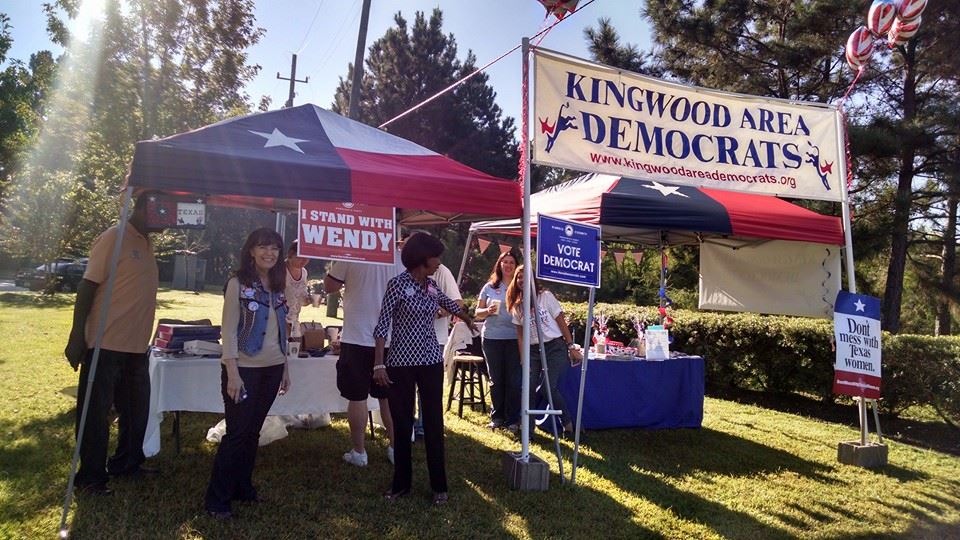 The Kingwood Area Democrats had secured a prime spot at the early voting location.There were balloons, coffee, donuts, and trinkets for kids. There was even some music. Throughout the day many people stopped by to get some coffee. In this seemingly dark red suburban town, many people who came up were elated that not only Democrats but Liberals would stake their position with pride. A man in a Tea Party decorated truck policed the area ensuring that everyone at the gathering could see his displeasure.

In this area like in many parts of Texas, Tea Party sympathizers are more vocal than their numbers suggest they should. They have more influence than their numbers suggest. At doctors offices, car repair shops, restaurants, and everywhere else with a television, they generally effectively force all to consume Fox News. This is but a soft continuation of the Powell Manifesto where an ideology subliminally infiltrates every aspect of our society in order to indoctrinate.

How then does a Liberal survive in Texas? For too long the answer has been ‘keep your liberalism to your self or within your close circle’. The problem with that are twofold. First, that stance effectively changes the body politic. Politicians really believe they are serving a majority if a portion of the electorate remains silent. Secondly it changes the aggregate psyche of the population. If no one is expounding liberal, progressive, enlightening new ideas, the old status quo ideas become the only ideas. Everyone acquiesces to it. It becomes the norm.

What then must a liberal do in Texas? One must develop a think skin. One must realize that those promoting an alternate ideology, one they generally know little about as they parrot its tenets are just like you. Very few realize how much alike most people are. Differences must be magnified to ensure a dialogue of commonality does not occur.

Here is a true story that illustrates much. While many of the Kingwood Area Democrats were having friendly conversations in the booth, a very irate female doctor barged into the area. She was pointing her fingers with disdain. She called us Liberals among other things as if Liberal was a dirty word. She then told us that Obamacare would destroy the country.

Let me digress for a minute. All the rights attained in this country came from the doings of both Democratic and Republican Liberals. Liberals fought to end slavery. Liberals fought to ensure women would get the right to vote. Liberals ensured humane working condition. In effect the rights that Americans have were fought for by those who refused the status quo, Liberals. It is for that reason that the powers that be needed to redefine the word Liberal into a negative.

The woman, the doctor that entered our booth is a smart woman. After-all, she is a doctor. It does show how ideology can hinder pragmatism and logical thinking. Drew Westin explains this concept in his book “The Political Brain” where he talks about reaching people not through statistics but through their hearts. Many of our Kingwood Area Democrats were taken aback. A few were even incensed and simply walked away. As the doctor attempted to leave, I begged her to stay. Why? I wanted to remove the caricature she had of the Kingwood Area Democrats and of Liberals in particular.

We could have gotten into a shouting match or we could find some way to dialogue. We chose the latter. The Obamacare debate was actually quite easy. Instead of telling the doctor why Obamacare was better than the status quo, I asked her what would be her solution. She responded with the standard tag lines about interstate insurance purchasing, portability, and choice. As a doctor, she knew all that was needed. When I calmly asked her point by point,  that if Obamacare provided what she stated, if she would then agree that it was not as bad as she thought, she said she would look into it.

I then gave her my personal story of having a wife with Lupus, a preexisting condition. Inasmuch as I have being an entrepreneur that has always had insurance and received nothing from the government, my wife’s condition could eventually bankrupt us sans Obamacare. I asked her what would she suggest for my family. She thought about it but her silence said it all. She soon after said, “You people are nice people. I never expected this when I came in to talk to you.” She was referring to our Kingwood Area Democrats. She then left with a completely different attitude. We were no longer the caricature of Liberals or Democrats she expected based on her Fox News programming. Yes, the effectuated Powell Memo is Fox News as well. There is even a possibility that the word Liberal would not immediately shutdown her channels of comprehension.

One must not be naive to believe that encounters like this are enough to change these people’s minds. What is important is that these types of dialogues occur and are replicated over and over again. When entering an establishment, kindly ask that the channel be changed from Fox News. If it upsets some, attempt to have a civil dialogue. Talk to people. Don’t talk down to them. Do not attempt to corner them. We all have the ability to fall for some level of indoctrination. This is even evident on the Left, but that is for another post.

I covered this on my Houston, Texas Pacifica radio show Politics Done Right on KPFT 90.1 FM where I received many calls from Texas Liberals and Libertarians. Check it out here.