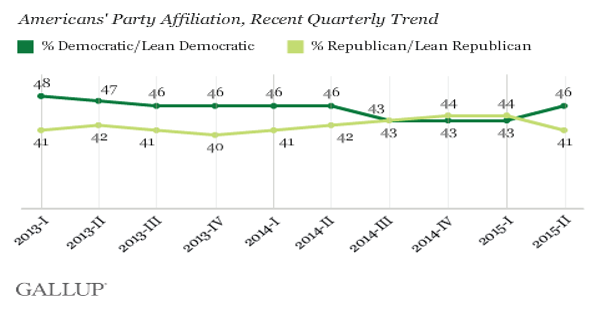 PRINCETON, N.J. — In the second quarter of 2015, Democrats regained an advantage over Republicans in terms of Americans’ party affiliation. A total of 46% of Americans identified as Democrats (30%) or said they are independents who lean toward the Democratic Party (16%), while 41% identified as Republicans (25%) or leaned Republican (16%). The two parties were generally even during the previous three quarters, including the fourth quarter of 2014, when the midterm elections took place.

After the 2014 defeat many Democrats believed, including yours truly, that Democratic apathy may have sealed the Center Right to Right Wing governance of the country inasmuch as the policies people yearn for are generally Liberal. The policies outlined by Bill de Blasio’s Progressive Contract with America are supported by most Americans, Democrats and Republicans alike.

The President recently touted the successes of Democratic policies in his visit to La Crosse, Wisconsin. In the speech he contrasted Wisconsin with Minnesota, an adjacent state. Minnesota implemented Liberal policies. Wisconsin implemented conservative polices. The experiment revealed what most of us already knew. Minnesota had better employment, much higher median income, and a more upwardly mobile population.

The President once said that eventually good policies become good politics. One hopes this is the new genesis of that realization.