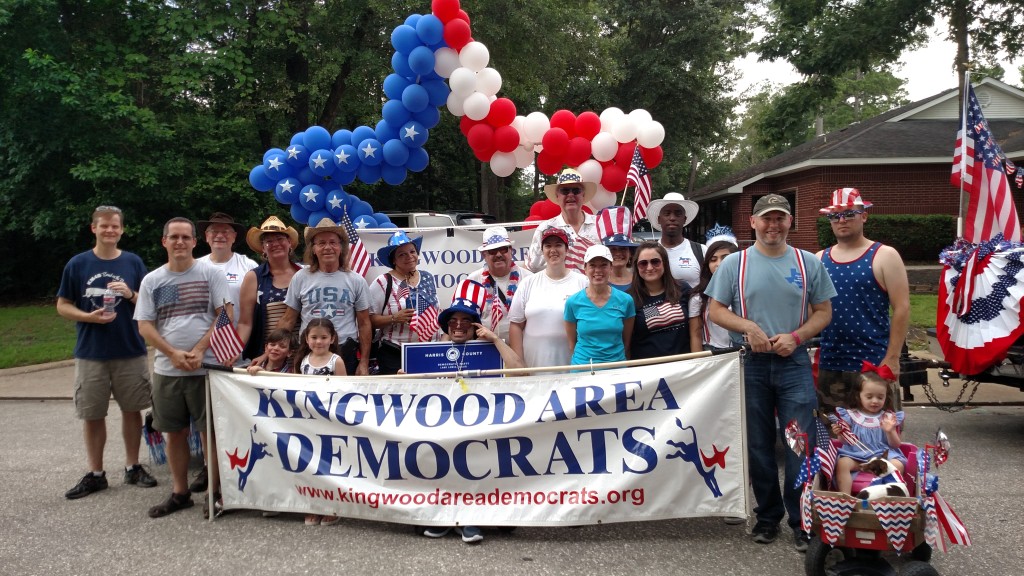 Kingwood Area Democrats participated in the 2015 4th of July Parade in Kingwood, Texas. Members interacted with many Democrats, Republicans, and others in the crowd. The above photograph came courtesy of a Republican neighbor.

Kingwood purports to be a very Red Republican Conservative stronghold in the Houston area. For a very long time I have been saying that there are many more Democrats and Liberals in this town than the ‘records’ would indicate.

While walking in the parade we had members with push cards introducing our club to folks who may not have known that Kingwood had a very strong and active Democratic infrastructure. In order to not simply give cards to people who would throw away, our members asked folks if they were Democrats or would be interested in the organization. Surprisingly many stepped out and asked for the cards.

That is a big step in this town as peer pressure tend to keep many from asserting their true beliefs. It was evident that there were many who wanted to step out but just could not. It was all in the eyes and the shoulder shrug. Check out my recent Politics Done Right radio show on being Liberal in Texas here.

Before the parade started, I had a rather encouraging conversation with a 70 year old chemical engineer who was once a Democrat (like most Texans use to be) and had bought into the Conservative ideology lock stock and barrel. I pressed on his analytical skills. After all he is an engineer. It was amazing that while he did not agree with my left leaning belief in a government large enough to ensure it is we the people and not corporations that control our destiny, we agreed on most other issues. That is the fear of the Plutocracy. They fear that most Americans will realize they have much more in common than they thought. At that point Americans will get together and apply their wrath to the ones that really divide us and extract our wealth.