The populace will decide if Bernie Sanders is being underestimated 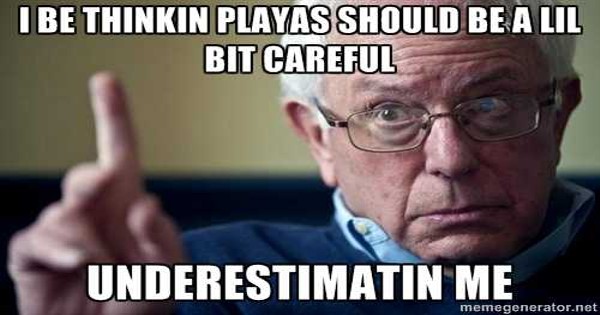 I stumbled across this earlier on Reddit today and simply had to post it. I am becoming more upset as I watch the media disregard a candidate who is receiving more support from the population than all other candidates combined. They are valuing candidates using their time to sell the message of corporations, millionaires, and billionaires for a price as opposed to someone who already has the sentiment of most of the population. The sentiment from WaPo's Ruth Marcus is probative as she dismisses Bernie Sanders inasmuch as he is attempting to listen as he brings the crowds.

I went to cover Bernie Sanders at his campaign rally in Houston yesterday. He has a prescient statement we better heed. "The debate we should be having is how we create a country that works well for all of our people," Bernie Sanders said. "They have the money. But we have the people. And this is what I know. When we reach out to our neighbors, our friends, and our coworkers. When we revitalize American democracy again, more people to be voting. When we stand together and not allow people to divide us, by race or country of origin or sexual orientation or gender. When we stand together there is nothing, nothing, nothing we cannot accomplish. … This is our country. Let’s make sure we take it back.”

CNN made my jaw drop this morning

Submitted 5 hours ago * by peppermint-kissTexas

So I tuned in to CNN this morning, what has long been my main source of TV current events, hoping to hear about the Bernie Sanders rallies over the weekend.

7:00am, top of the hour Now they have to talk about Bernie, right? They even tease it in the promo. I settle in for the story.

Literally Bernie Sanders had not one, not two, but THREE record-breaking rallies over the weekend, in RED states no less. He's polling higher than every single Republican candidate, and at least 19 times higher than Martin O'Malley. He was a trending Twitter topic over the weekend, with tens of thousands of tweets. And yet he gets (literally) 1/10 the coverage of Trump in the time I watched, and equal time to Martin O'Malley?

I have always trusted CNN. I have always gone to them first for news. Now I see how twisted and biased they really are. I always thought people that said that were crazy, were so wrapped in their own bubble they couldn't see the real world. But honestly, the facts speak for themselves, this is jaw-droppingly crooked.

I turned it off. And I won't be turning it back on.

ETA: Bernie Sanders just re-tweeted the CNN piece I saw. Y'all watch it and tell me what you think. It wasn't even a full five minutes.

He's drawing bigger crowds than all 2016 candidates combined. We go behind-the-scenes with @BernieSanders on @NewDay. http://t.co/yuSWEk59QJ

All of his progressive supporters are just "bargaining chips" in the election, apparently.