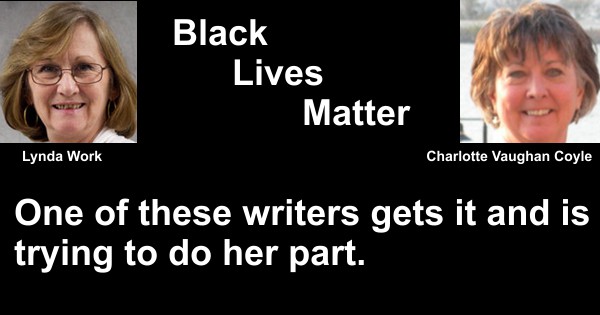 As I perused my Facebook newsfeed I found this gem from my dear friend, Minister Charlotte Vaughan Coyle. I was not at all surprised. Charlotte read an op-ed in her local newspaper that needed some important factual feedback and pushback. Charlotte did not specify author, title, or date of the op-ed. It was not at all difficult to infer from Charlotte's 'letter to the editor' (LTE) sent to The Paris News which article she was referring to. The article is titled "Cop's lives matter" by Lynda Work.

Reading Lynda Work's unfortunate hit job on Black Lives Matter illustrates the importance and necessity of Charlotte's response below. The two articles cited in Charlotte's response are also very relevant and important. They help inoculate the minds of many who would fall for the plausibility of misinformation about the Black Lives Matter movement.

I am disappointed in your recent op-ed in The Paris News that vilified Black Lives Matter. Here are my primary critiques:

1) Characterizing the Black Lives Matter movement as a hate group is irresponsible. This current effort to disrupt the status quo of white privilege in America stands squarely in the tradition of the Civil Rights Movement. The methods are different, yes, because toxic racism remains entrenched within our society even after generations of hard work. In light of recent events of police violence, it was inevitable that activists would find their passion and rise to the occasion. They will not – and they should not – stay in the place society has assigned them. It is high time for real equality in this nation.

2) Characterizing the police as white knights is irresponsible. Of course many of our cops are wonderful human beings and excellent public servants. I am proud to call Chief Hundley and Sheriff Cass personal friends and I admire their character and their professionalism. I also grieve the inexcusable murders of too many cops.

But denying that America has a very real problem with some very bad cops contributes to the myth rather than exposing the reality. Some cops break the law. Some cops harm the people they are supposed to be protecting. Some cops lie and cover up their own actions and the illegal acts of others. Some cops are racist. Some cops are inept. Some cops need to find a job where they are not given a gun and a badge. Good cops – and all the rest of us - will only benefit from the rooting out of the bad, incompetent cops among us.

3) Characterizing Fox News as a credible news source is irresponsible. I was astonished to see this in your op-ed piece. If you will represent yourself as a fair and thorough journalist, then interview some of our local African American citizens. Interview members of the local NAACP. Interview our police chief and our sheriff. Find out if these people see Black Lives Matter as a hate group. Everyone will have a different opinion, I daresay, but I doubt you would get the same kind of recklessness Fox News spews.

Here are two articles I encourage you to read. They too are op-eds but they may help you open your mind and er alternative understandings.

If All Lives Really Matter: The False Racial Unity of Glenn Beck’s Massive March on Birmingham

I look forward to hearing back from you.
Respectfully yours,
Charlotte Vaughan Coyle

Charlotte's LTE is important on so many levels. She ensures that fallacies, even in a local newspaper, do not go unanswered or unchallenged. As a white woman she provides a 'familiarity' many sadly need before really opening their minds for truth on racial issues. And she emboldens many who would normally sit on the sidelines even as they know the truth. I hope anyone that reads Charlotte Vaughan Coyle's piece would be encouraged to follow her path. She uses her blog to do just that.

It is easy to be silent. It is easy to take the path of least resistance. It is easy to attempt to justify one's unease with a movement with willfully misleading externalities to justify that unease.  I saw this in full vogue by many that should have been allies at Netroots Nation 2015. I wrote about it here.

An ally is one who can be counted on even when tactics are not necessarily in sync with the ally's level of comfort. An ally gives advice but most importantly empathizes. An ally helps deflects the incoming shrapnel to ensure the cause can continue to fruition. We must be allies for causes intended to move all forward.