News and Announcements from the Move to Amend Coalition 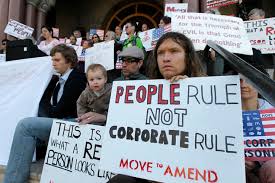 This month we’re offering an Introduction to Move to Amend.

➤➤ RSVP for the webinar at: http://movetoamend.nationbuilder.com/webinar_10062015 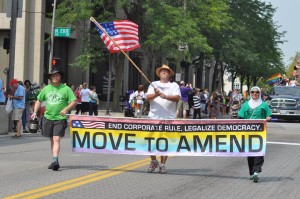 In Ohio, the folks at Toledo Move to Amend participated in Toledo’s annual PRIDE parade in late August, marching in solidarity alongside LGBTQA folks. This marks another in a series of movement-building action led by Toledo organizers.

In July, Toledo volunteers collected 11,000 signatures to send the initiative to the city’s voters. The petition states that the voters of Toledo support amending the U.S. Constitution to establish that corporations are not people and money is not speech and would establish yearly public hearings to discuss concerns over money in politics and corporate influence.

➤➤ Big thanks to fellow Amenders Douglas Jambard-Sweet, Maysoon Otaibi, Randy Moore, and all the Toledo folks for their great show of solidarity and all their hard work!

In Hawai’i, the Hawai’i County Council passed two resolutions calling for a constitutional amendment to end corporate personhood and get money out of politics! The council voted 6-3 to approve a resolution presented by North Kona Councilwoman Karen Eoff to pressure the state’s congressional representatives to push for an amendment in Washington and voted 7-2 asking Hawai’i State Association of Counties to include the measure in its priorities package for the state legislature.

Dozens of people submitted written or oral testimony, all in favor of the measure. Kona volunteers collected more than 2,000 signed petitions in support of amending the U.S. Constitution to establish that corporations are not people and money is not speech.

Hawai’i was the first state in the nation to call for a constitutional amendment clarifying the distinction between people and corporations following the Supreme Court’s 2010 Citizens United v. Federal Election Commission decision. That resolution, sponsored by request by the late Rep. Bob Herkes, D-Ka‘u, was helpful, but it didn’t go far enough, said Marvin Feldman of Kona Move to Amend. “It is essential that the will of the people be expressed by our government,” said Feldman.

More than 600 resolutions have been passed by local governments across the country calling for an amendment and 16 states have passed similar resolutions.

➤➤ Big thanks to all our volunteers in Hawai’i for all your great work helping to pass these resolutions!

➤➤ Tune in live on Thursdays or check out the archives at http://www.blogtalkradio.com/movetoamend.

Move to Amend Reports, our weekly online podcast, is back with a revised format and new airtime, every Thursday mornings at 10:00am EST!

Move to Amend connects you with the activists and organizers working on the frontlines of the democracy movement, to bring you the lowdown on corporate rule, corporate personhood, and money as speech. Tune in any time of day — from your morning commute to your evening downtime — or download us from iTunes!

Get reminders about shows so you never forget to tune in – sign up here for a weekly reminder!

Join the Interfaith Caucus of Move to Amend!

How much more powerful can this movement be when thousands and then millions of us come together in outrage about the violation corporate action causes to our most cherished beliefs, values, principles and doctrines?

It is the purpose of the MTA Interfaith Caucus to work together at national, state, local, and faith community levels to pass an amendment to the U.S. Constitution affirming that only human beings, not corporations have constitutional rights and that money is not the equivalent of political speech. We are seeking to bring to our nation a democracy where all natural people, regardless of race, gender, religion, economic condition, ethnic background, political persuasion, or sexual orientation can participate meaningfully in a just society.  We believe that people of faith and conscience have a distinct role to play in this endeavor to amend the United States Constitution as an expression of our convictions and we are joining hands to face down the inhumanity of corporate rule.

➤➤ Click here to get involved with Move to Amend’s Interfaith Caucus!

Share the Timeline of Personhood Rights and Powers at Your Next Event!

Choose laminated or not.

➤➤ Click here to get your own timeline and help educate your friends & neighbors about corporate personhood today!