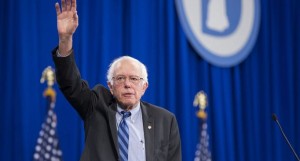 If one listens to the mainstream media, inasmuch as Bernie Sanders is getting more coverage, he is still given little respect. He is still ignored as viable. The fix is in. No! The attempted fix is in. How does one know that?

Bernie Sanders is finally being included in general election match ups more frequently than before. It is generally shown that he would beat likely candidates. Of course the media must find a way to counter those polls. How do they counter current reality? Find a poll that says Americans would rather elect an atheist than a socialist.

Of course the definition of socialist is dubious to most. After-all, if one listened to the 2008 and 2012 campaign, Americans may have already elected a socialist president twice. Look, President Obama never declared himself a Democratic Socialist, others did it for him.

The grassroots believe in Barney Sanders' message. Many on the Right and the Left and the Middle are well in-tuned to it. Why? Because neither the Right nor the establishment Left has worked out for middle-class or poor America irrespective of party.

America seems ready to try something new. On the Right the sum of the poll numbers for insurgent candidates is near or above 50%. On the Left, for those really paying attention, it is with Bernie Sanders. Yes, Hillary Clinton is winning with the base in the aggregate. However, as more pay attention to the race, will insurgency on the Left really take the absolute lead as well? All indications empirically are that that is the case. Bernie Sanders' recent campaign windfall from the grassroots should be probative.

So, the Democratic Party can keep attempting a coronation. They can continue attempting to stifle debate to guarantee an outcome. They can keep ignoring what grassroots America, middle-class America, poor America is yearning for. They do it at their own peril. America may just be in the mood to elect a populist, a Socialist Democrat. However if they are given a choice between an establishment candidate and a conservative that says 'why not try me now' they just may do that.