This should not happen in an HISD race 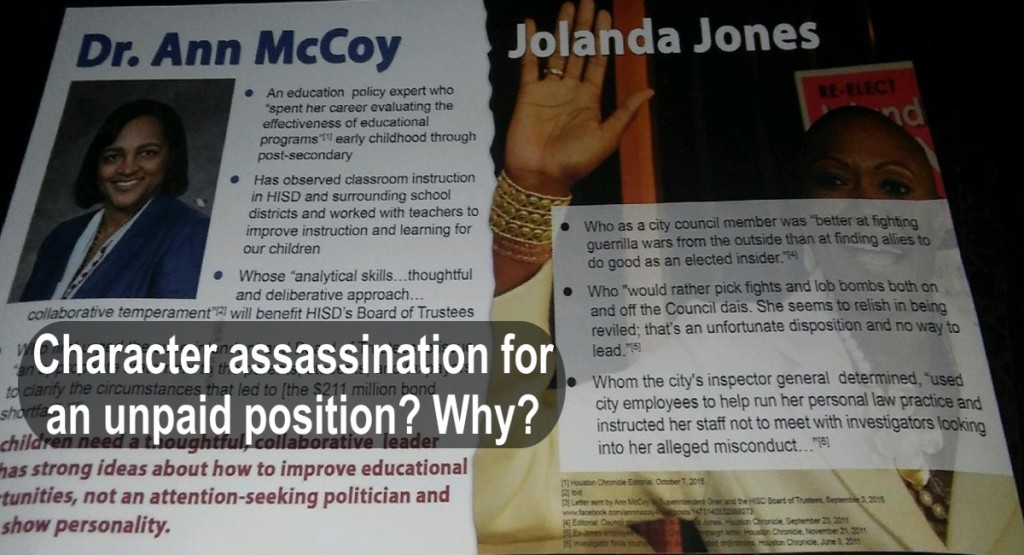 In the last few weeks Jolanda Jones have been appearing in my news feed with pictures of her campaigning. She has been effectively using social media to show her engagement with the average Jane and Joe in the community. I love to see politicians who never feel they are above those who put them in office. We have many of those in Houston, Sylvester Turner, Adrian Garcia, Gene Green, among a few.

A couple of days ago I commented on one of Jolanda Jones’ many posts showing her engaging with her potential constituents. I told her she was the hardest working campaigner I had ever seen for HISD Trustee.

Shortly thereafter I was provided with the above push card. It is was paid for by her opponent Ann McCoy’s campaign. The HISD Trustee job is an unpaid position. So the question is, why would someone go through the trouble to malign a neighbor running for the same office for an unpaid position? One’s donors are likely very telling. Likewise, one’s supporters have a tendency to determine if support comes from the grassroots or the power structure that has thus far failed the HISD students.

As an activist I find it objectionable when activists who by nature must use different methods to ensure they get attention from the powers, from the powers of a burgeoning plutocracy in order to effect some modicum of change, are attacked. This one seeks to malign someone who really works her base and stays in touch with her base. 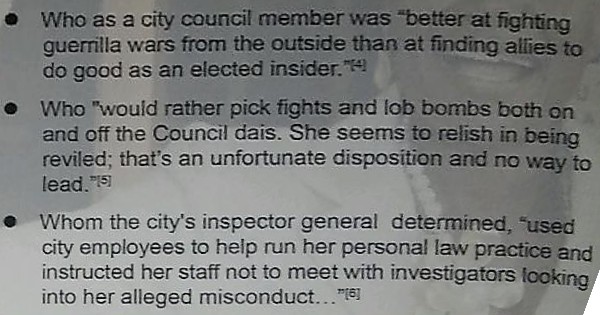 Just maybe the analysis of the flier tells the story. It is essential to first eliminate the last bullet point. Jones was not charged with any wrongdoing in office and has always maintained that she did nothing wrong. Unlike many accused of wrongdoing who know they are innocent, Jones went on offense. They tried to get this activist disbarred but her record remains squeaky clean. I have always believed that Jolanda Jones would be a target for being a vocal activist who pulled no punches. The good old boy network seldom allows dissension.

The flyer’s first two points are interesting. They really represent the essence of what is needed in several political bodies right now. How well is the board working right now. The Houston Chronicle reported that “Weak supervision of contractors and insufficient competition among bidders contributed to a $211 million shortfall in the Houston ISD’s construction bond program,” according to the district’s chief auditor. Of course it was’t fraud even as there were no-bid contracts and contractors’ pricing was fungible.

I do not generally come out in favor  or against anyone in local elections other than recommending that those who support the humane moral tenets of the Democratic Party are supported. I do have a very long memory. I remember several years ago when at times Occupy Houston ran the risk of having ‘issues’ with the police, Jolanda Jones had the respect of both sides to calm the waters. Just maybe she throws bombs when needed and soothing waters where necessary.

It is clear to me that the students of HISD would be better served now by someone willing to fight a guerrilla war while lobbing bombs on their behalf. After-all those ‘finding allies to do good as an elected insider’ are failing miserably.